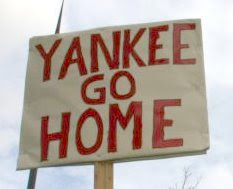 There was a time in the 1960's when a US Politician or even the President would visit a Latin American nation and see signs all over the country stating: Yankee Go Home!

It was a way for people to protest an opposition to US Foreign Policy.

These so-called People's Protests were usually cooked up by the local Communist Party in the area as a way of giving the United States a Black Eye.

It has largely stopped, except for one place: Israel....

"How dare he (Obama) tell the Jews where they can or can't live? The era when Jews were banned from living in different places has ended," said Rabbi Waldman.

There is more, and it IS a must read. Oh and take note of this statistic from the article:

...recent Israeli polls showing that Obama's approval rating in Israel is at 6%.

May the approval rating in the US drop so low.