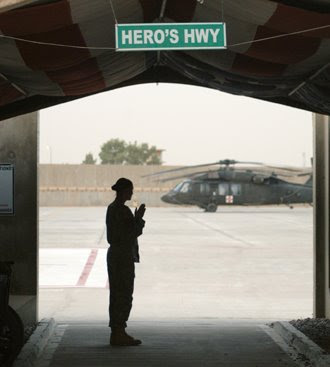 JOINT BASE BALAD — The emergency-room trauma call and the medical staff's immediate action upon his arrival is only a memory to her now; sitting quietly at the bedside of her brother-in-arms, she carefully takes his hand, thanking him for his service and promising she will not leave his side.

He is a critically injured combat casualty, and she is Army Sgt. Jennifer Watson of the Casualty Liaison Team here.

Although a somber scene, it is not an uncommon one for the Peru, Ind., native, who in addition to her primary duties throughout the last 14 months, has taken it upon herself to ensure no U.S. casualty passes away alone. Holding each of their hands, she sits with them until the end, no matter the day or the hour.

"It's unfortunate that their families can't be here," said Watson, who is deployed here from Fort Campbell, Ky. "So I took it upon myself to step up and be that family while they are here. No one asked me to do it; I just did what I felt was right in my heart. I want them to know they are heroes.

"I feel just because they are passing away does not mean they cannot hear and feel someone around them," she continued. "I talk to them, thanking them for what they have done, telling them they are a hero, they will never be forgotten, and I explain my job to them to help them be at ease knowing the family will be told the truth."

In general, Watson explains to the patients that the CLT works within the Patient Administrative Department here, acting as a liaison for all military and civilian patients in-theater and initiating the casualty-notification process to the patient's next-of-kin.

Upon their arrival at the Air Force Theater Hospital, Watson speaks with each combat casualty getting as accurate information as possible about the incident. Once the doctor gives their diagnosis and severity of the patient's injuries, Watson and her team complete and send a Defense Casualty Information Processing System folder report to the Department of the Army or the patient's respective service so that their next-of-kin can be notified.

Furthermore, once the initial report has been sent, the CLT and Watson make hourly rounds to the intensive-care ward or unit to check on the patient's well-being, or, for the more critical patients, to check on their stability.

"We are constantly communicating and making sure the family knows everything we know," said Watson. "We want to put the families at ease and let them know that everything is being done for their loved one. From the moment a servicemember is brought in through Hero's Highway, they are never alone."

Each month, the AFTH, the equivalent of a U.S. Level-1 trauma center, treats more than 539 patients; more than 101 are trauma cases in the emergency department. Although Watson can never predict if and when her fellow brothers- or sisters- in arms may need her, she is always available here.

"The hospital staff is wonderful," said Watson. "They know how important it is for me to be there with them and if they know it's time, someone will come and get me no matter where I'm at.

"I see it as a form of closure, not just for me, but for the families so that they know that somebody was there with their son or daughter," she added. "My heart goes out to every patient that comes into the hospital, especially my wounded in action Soldiers. I feel like everyone who comes through the door is my brother or sister."

Not surprisingly, Watson's dedication to duty and her hard work have not gone unnoticed. She has touched the lives of all those who she has come in contact with, to include the 332nd Expeditionary Medical Group commander, Col. Mark Mavity.

"Sgt. Watson's story is one of the most compelling here in the Med Group," said Mavity. "She is a Soldier's Soldier who combines an unparalleled level of compassion and commitment to our most grievously wounded warriors with amazing professionalism each and every day.

"What is truly incredible is that she is a personnelist by training but with the heart of a medic who has taken it upon herself to hold the hand and keep a bedside vigil with every mortally wounded Soldier who has spent their last hours within the AFTH," continued the colonel. "She will not let her brave brothers or sisters pass alone. This is a heavy burden to bear and at great personal emotional cost to Sgt. Watson, but she is unwavering in her final commitment to these Soldiers. You don't have to look any further than Sgt. Watson to find a true hero."

"Angel" and "hero" are only two of the many titles Watson has been given since arriving at JBB; although she is appreciative of the kind words, she remains humble.

"I am far from an angel," said the sergeant with a smile. "I just do what is in my heart. I guess for me, I think about the family and the closure of knowing the Soldier did not pass away alone. To say I'm a hero ... no. The heroes are my guys who come in [through Hero's Highway]."

Reflecting on her time here, Watson said she is extremely thankful for the opportunity she has had to work side-by-side with the Air Force.

"The staff of the 332nd Expeditionary Medical Group has done an amazing job since I have been here," she said. "They are incredible. They have done procedures and saved the lives of the most critically injured Soldiers, and have been some of the most professional people I have ever worked with.

"I want the families to know that their servicemember was a hero," Watson concluded. "They made the ultimate sacrifice, but before they passed on, they received the best medical treatment, and the staff did everything they could -- they were not in pain and they didn't die alone."

Thank YOU for your amazing service, Sgt Watson.

[Be sure and check out the comments on Argghhh! !! The Home of the two Jonah's here.]
Posted by The Brat at 3:33 AM

I have been through that walkway too many time to count anymore. The Balad Staff is top notch.