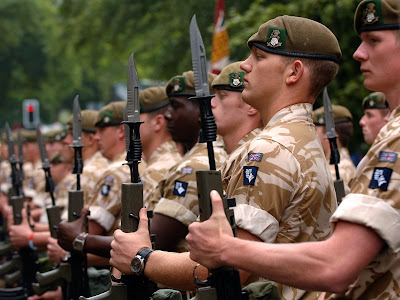 The 1st Battalion the Yorkshire Regiment enjoyed their Homecoming Parade in York yesterday, Wednesday 21 July 2009, having recently returned from operational tours in Iraq and Kosovo, while also contributing forces to Afghanistan. Part of 20 Armoured Brigade, The Iron Fist, they were among the last British combat troops to participate in bringing stability to Iraq. Lead by the Band of the Kings Division, the soldiers were welcomed back by large crowds as the parade marched past Mansion House for the salute to the Lord Mayor and the Sheriff of York before being hosted with a buffet and drinks. [Picture: Corporal James Williams RLC, Crown Copyright/MOD 2009]

WELCOME HOME, lads and THANK YOU!
Posted by The Brat at 4:44 AM