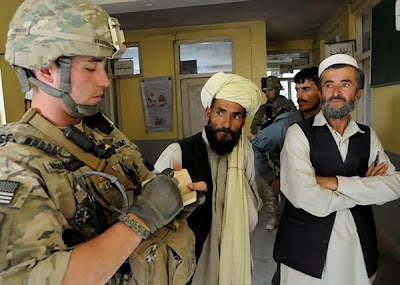 After inspecting a local clinic and several pharmacies during a patrol in the Quara Baugh district, Sgt. Dennis Magnasco, a medic from East Boston, Mass., heard that two Afghan boys had been injured and were in the local health clinic.

Magnasco discovered one boy had minor injuries, while the other had shrapnel in his abdomen, torso and upper arm.

“The doctor was prepared to let the boy go home, but because he was still bleeding through his bandages, I asked if I could help. The doctor agreed,” Magnasco said.

After getting permission from the local doctor, Magnasco further cleaned the wound, controlled the bleeding and gave the boy antibiotics.

“I was concerned about infection,” he said. “I gave him enough antibiotics to prevent infection for the next 24 hours.”

Magnasco also told the boy’s father how to redress the wound, and provided some gauze.

“At one point [the boy] held his hand out to me and I didn’t know what to do, so I just stood there and held his hand,” Magnasco said. “But, I’m glad I was there, because I feel I significantly increased his chance of survival against infection.”

Meanwhile, one little Afghan boy feels better and is on the road to recovery.


Thank you for your service, Sgt. Magnasco