Wootton Bassett marks end of repatriations through the town 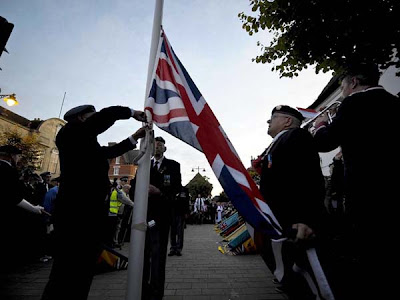 The official flag party lower the Union Flag for the last time on the High Street in Wootton Bassett [Picture: Ben Birchall/PA Wire 2011]

The town of Wootton Bassett held a sunset ceremony last night to mark the end of repatriations of British Service personnel killed on operations passing through the town.

In an act of remembrance organised by the local council, the people of Wootton Bassett watched as the Union Flag was lowered and taken to the Memorial Garden in Oxford, specially commissioned by Oxfordshire County Council, where the flag will be raised in a civic ceremony today.

From today, 1 September 2011, the repatriations of Service personnel killed on operations will return to RAF Brize Norton where there is a new, purpose-built repatriation centre.

In addition to the £2.8m repatriation centre there is the newly-named 'Britannia Gate', through which the corteges of fallen Service personnel will leave RAF Brize Norton.

The centre includes a calm and quiet space away from the bustle of the station where families can gather ahead of the repatriation flight to watch the aeroplane landing and then observe the formal military repatriation ceremony.

There is also a Chapel of Rest where families can spend private time with their loved ones before the journey to the John Radcliffe Hospital.

"This centre has been designed with the needs of the families and loved ones of those being repatriated at its heart. All along this has been of paramount importance and I am confident that the facilities we now have will assist us in our efforts to ensure we provide the maximum support at what is an extremely traumatic time.

"The symbolism of Britannia Gate is huge. It is the last time those who have been killed will leave a military base....

Go here and read the rest about this town that has always stood for, and honoured, our Fallen..