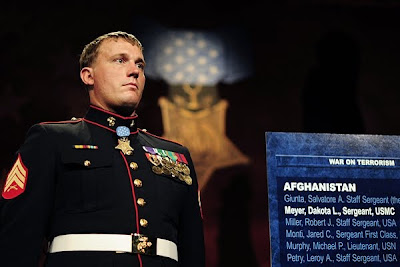 Medal of Honor recipient Marine Corps Sgt. Dakota L. Meyer stands next to a plaque bearing his name after he was inducted into the Pentagon's Hall of Heroes during a ceremony in the Pentagon, Sept. 16, 2011. DOD photo by Air Force Tech. Sgt. Jacob N. Bailey (For a photo essay of the MoH ceremony, go here)

Meyer became the first living Marine to receive the Medal of Honor for operations in Afghanistan, where he repeatedly returned in the face of heavy enemy fire to save his Marine, soldier and Afghan comrades and retrieve the bodies of those killed.

Today, Panetta recognized “the incredible valor and the uncommon fearlessness” Meyer demonstrated, disregarding his own safety to charge the enemy kill zone “again and again and again” to search for his comrades and friends.

Meyer “truly went above the call of duty,” Panetta said....

Thank you for your service, Sgt Meyer.