IDF soldiers in line of fire by PA rioters 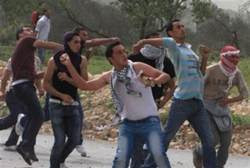 Hundreds of Palestinian Authority Arabs held a violent demonstration Wednesday afternoon near the Zif Junction in Judea, south of Hevron.

The protesters hurled sharp-edged rocks at IDF soldiers, who responded with crowd-control measures to disperse the demonstration. No one was injured and no damage was reported in the incident.

Dozens of PA Arabs also clashed with IDF forces near the Qalandiya checkpoint north of Jerusalem. The rioters ignited tires ablaze, and hurled rocks at the security forces, who used crowd control measures to disperse the mob.

In addition, PA Arabs flung a concrete block at a passing Israeli-licensed vehicle near the Huwarra checkpoint outside the Samaria city of Shechem. The vehicle was damaged in the attack, but the passengers were not injured.

Although the PA security forces have also been issued equipment for crowd control, they have done little to contain the re-emerging Arab violence. The sole demonstration of PA security containment came within Ramallah earlier Wednesday, when masked men burned an American flag.

The incident occurred during a speech by PA Secretary-General Tayeb Abdelrahim marking ceremonies held to celebrate recognition by the United Nations of the PA as a new, independent country. Such a celebration is actually premature, as no vote on the matter has yet been taken – and in fact, the resolution has not yet been proposed – which could lead to further inflamed passions if the promised reason for the celebration does not, in fact, come to pass.

The riots appear to be gaining pace and may be part of the previously announced PA government's strategy of “increased demonstrations” leading up to Friday.

PA Chairman Mahmoud Abbas is scheduled on that day to demand in his speech to the United Nations Security Council that the international body recognize the PA as an independent, sovereign nation, and grant it “full membership” in its ranks.