The naked truth about America part 1 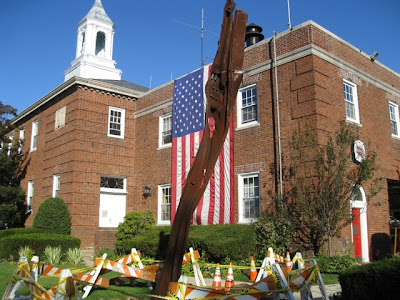 Back in February 2009 I wrote a column called I Believe...at the time of writing that, it had been many years since I had spent any time actually within the American borders. Read that column here.

Today I AM in America, spending time with amazing Americans, and my faith in America as I wrote about back in 2009, is even stronger than it was back then.

Take a look at that picture above. THIS is the REAL America. This picture, part of the WTC steel, is now a permanent part of small town America: Floral Park. I don't care what your president instructs America in how they should observe and honour those we lost on 9/11/2001. In Floral Park, real Americans, who wear their naked patriotism loud and proud, need no hints from any politician.

In the first 24 hours of being allowed to cross the border (more on that another time,) I looked deep into the hearts of my 9/11 family; I saw a huge Canadian flag with patches of every Fire Department across Canada, as part of a museum exhibit honouring those we lost on 9/11; attended a dinner, and fell asleep at the table as politicians did their usual bloviating.

I am privileged to have met and spent time with fire fighters from all across the state of New York as they were at the New York Old Fashioned Fire Fighters Tournament named in Keith G. Fairben's honour (and yes, I am now officially one of "Kenny's Bitches." I have the shirt to prove it!!) More on that later...

As I sit here in an office in another family home in small town America, I can touch, see and feel the real America, the naked America, if you will - and yes, THIS is the America I love so dearly.

Never mind that on this day Obama for America has launched a new site called AttackWatch.com, asking Americans to report their fellow citizens who challenge the Obama party line, and expose the lies of HIS vision of America. Obama's vision of America has no place in the America I know and love, and he is irrelevant to the Americans I have been privileged to meet. Real America is not afraid to show their love of their country in all its naked sincerity.

The day before 9/11 I was humbled to be included in a party that was a celebration of life for the SURVIVORS of 9/11. From NYC cops, to EMS, to Fire Fighters, ESU, all gathered at Jack Delaney's house for what is now an annual event embracing those who lived through the horrific events of that day. The emotions of every American I have met is naked, real, with no thought for public image, or msm cameras.

From the minute I arrived in America this time, I have been part of casual lunches (and yes, Virginia, there really IS such a thing as a free lunch, and no, I don't mean that the way Obama would have you believe...) to formal ceremonies at firehalls. I have attended memorial services in the local church. The people I have met are quite simply the best of America and I am so humbled that I get to share the events of this week with all of them.

While Obama and the politicians mug for any and all media cameras, and while the msm follows the politicians around, thinking they are recording America for the masses, I KNOW the naked truth of America and Americans: real Americans..

[And yes, this is my first roundup. There will be more on all these people later.]