3 US sibs serve in Afghanistan

GHAZNI PROVINCE, Afghanistan, April 9, 2012 – As Army Warrant Officer Weldon Malbrough Jr. goes about his business on this dust-choked, dirt-basket-rimmed base here, he is one of many -- a paratrooper among paratroopers of the 82nd Airborne Division’s “Devils in Baggy Pants” 1st Brigade Combat Team. 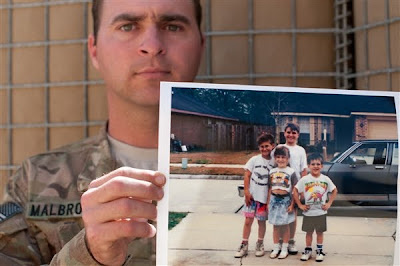 The 30-year-old force-protection staff officer also is one of three Malbroughs now deployed to Afghanistan. Jordan and Jessica, the family twins, followed Weldon into the Army, and with the pace of deployments in recent years, it was only a matter of time until their deployments overlapped.

It’s not the first time their mother, Windy, has worried about more than one child in a war zone. Army Staff Sgt. Jordan Malbrough enlisted in 2005 and joined Weldon in Baghdad as part of the surge in 2007. Jordan now serves as an artillery radar operator with the 25th Infantry Division’s 4th Brigade at Forward Operating Base Apache in Afghanistan’s Khost province.

In recent years, the idea of families sending multiple children to the front lines has become part of the national consciousness thanks in large part to the movie, "Saving Private Ryan," in which three brothers are killed during World War II, and the last surviving brother is caught up in the Normandy invasion.

Windy has seen the movie, but it’s one she has never internalized, with three of her four children deployed to Afghanistan.

“It’s something they chose to do,” she said. “To keep peace with my mind, I try to think happy thoughts.” She still lives in metropolitan New Orleans, where she raised her children. Another son, Philip, works on an offshore oil rig.

“There is no worry-free time for mom,” Windy said. “My kids are my heroes.”

“She is such a strong woman,” Jessica said.

Jordan enlisted at 17, and Jessica earned a college degree before enlisting. She was interested in an Army program to become a physician assistant or nurse, but that required three years of service. While her brothers pushed her hard to “drop a packet” and become an officer, she chose to enlist as a combat medic....