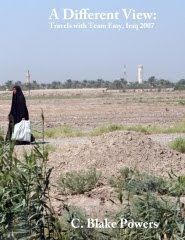 A Different View: Travels With Team Easy, Iraq 2007 is a wonderful book.

During the current Global War on Terror, a whole new genre of writing - books and blogs - has emerged. Unlike previous wars where only official media organisations would - perhaps - send reporters along (think Ernie Pyle,) in today's theatres it is often the Troops themselves who share their experiences, either through blogs or as books written after they have returned from the sandbox. Think Bellavia, think Luttrell for just two examples. I believe that it is these books/blogs, these retellings, that will stand the test of time and form the true historical narrative of all that our Troops accomplished in the wars fought since 9/11.

A Different View is an important addition to the war archives. C. Blake Powers ('civilian in residence' at BlackFive) took his camera and embedded in Iraq, and the photos in this book add a context that is usually missing from the msm coverage. Powers' photo collection shows the day to day life of troops in Iraq. The images fairly jump off the page: A brilliant sunset beautifully captured; an incongruous, unexpected item in the middle of the action, and Powers' clear-eyed focus shows us a view of a combat zone most of the public will never see.

Yes, there are pictures of sand, alongside pictures of canals, and yes, there are pictures of our Troops at checkpoints, but the texture, the clarity is so stunning, the viewer feels the heat, is IN the middle of a negotiation captured with a sharp lens. From vigilant Troops on guard watch, to down-time as the Troops watch a sporting event (I don't think it was the Olympic Gold Medal Hockey game) this book is an important - unique - record of what our troops do day in, day out, while most of America is at the mall.


A Different View is a great tribute to the Soldiers of Team Easy, and every picture is worth far more than a thousand words. Matt Burden of BlackFive writes the Foreword, and JD Johannes writes an introduction to this must-have book. A part of the proceeds is going to Cooking With the Troops - a 501(c)(3) organisation founded by Powers. All very good reasons to buy and read the book.

Go now, and order your copy - and go read Blake on B5 for more about this terrific book, that does our Troops proud. As a determinedly unobtrusive chronicler of our Troops in the Iraqi combat zone, Powers has shaped a book about our Troops, for our Troops and the civilians who love and support them. I hope to see more volumes of these embed photographs from C. Blake Powers.

[Be sure to tune into YouServed BTR tonight for an interview about A Different View]
Posted by The Brat at 2:41 AM