A military human resources (HR) clerk who worked to bridge the gap between ISAF troops and Afghan women in Helmand has received her Afghanistan campaign medal. 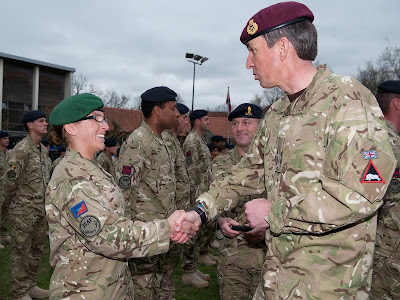 Private Louise Haughton, aged 26, deployed to Afghanistan with 35 Engineer Regiment as part of one of the Army's Female Engagement Teams, which have been developed to enable the military to better engage with the Afghan people, particularly women and their families.

In some parts of the country, Afghan women are rarely seen by, or communicate with, people outside their immediate family; particularly if they are male. As a result, male International Security Assistance Force (ISAF) troops are unable to freely communicate with an important part of Helmand's population and, therefore, may not be able to obtain a full understanding of the many issues and concerns of communities. The Female Engagement Teams, by virtue of being female, have the potential to bridge this divide....

Much more at the MoD here.