Syria: The very UNcivil war has ended - or has it? 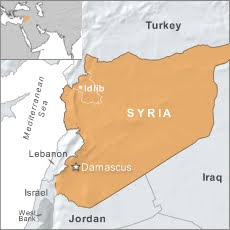 For these first few hours of April 12, 2012, the headlines have been: "Syria ceasefire truce is holding..."

From the BBC comes:

A ceasefire has come into force in Syria amid doubts expressed by Western countries about the government's willingness to stick to it.

Correspondents say the truce appears to be largely holding, with no reports of casualties or deaths so far.

However there were some reports of shelling and firing in the early hours and troops are still on the streets....(here)

There's a shocker - NOT! I am sure that news of such a truce will be a comfort to the thousands of Syrian families who have lost loved ones at the murderous hands of Assad loyalists:

The unrest began in the southern city of Deraa in March when locals gathered to demand the release of 14 school children who were arrested and reportedly tortured after writing on a wall the well-known slogan of the popular uprisings in Tunisia and Egypt: "The people want the downfall of the regime." The protesters also called for democracy and greater freedom, though not President Assad's resignation.

The peaceful show of dissent was, however, too much for the government and when people marched though the city after Friday prayers on 18 March, security forces opened fire, killing four people. The following day, they shot at mourners at the victims' funerals, killing another person.

Within days, the unrest in Deraa had spiralled out of the control of the local authorities. In late March, the army's fourth armoured division - commanded by the president's brother, Maher - was sent in to crush the emboldened protesters. Dozens of people were killed, as tanks shelled residential areas and troops stormed homes, rounding up those believed to have attended demonstrations.

But the crackdown failed to stop the unrest in Deraa, instead triggering anti-government protests in other towns and cities across the country, including Baniyas, Homs, Hama and the suburbs of Damascus. The army subsequently besieged them, blaming "armed gangs and terrorists" for the unrest. By mid-May, the death toll had reached 1,000. (More on the background here.)

For anybody who has paid attention these last many months, reading headlines of promises of truces, deals, is to remain hugely sceptical of any possibility the Assad loyalist troops will lay down their weapons, and cease killing their own citizens by the thousands. Such acceptance of the validity of a truce requires an unfathomable ignorance of the lessons of history. Not just the immediate history within Syria, where Assad has ignored many MANY pleas from the international body - UN, Arab League, and who can forget the incessant wagging of fingers and declarations of "unacceptable" out of the current US administration? - as Syrian innocent civilians have continued to be murdered by the hundreds.

In the constant barrage of the 24/7 news cycles, where the msm flits from one 'if it bleeds it, leads' headline to the next, it is easy to forget how and where such waves of UNcivil murders of ordinary citizens continue to sweep small nations apparently disconnected to ourselves, because it is happening in countries far, far away.

However, if history has taught us anything at all, it should have awoken us to the fact that what happens in seemingly isolated countries far from our own doorsteps can, and WILL have long-term ramifications, lessons for us all, ignorantly safe within our 'civilised' borders.

Syria is but the latest in a long list of countries where UNcivil war - wars of untrammelled murders of innocents - continues as the rest of the so-called civilised world looks away, or at the least picks and choose which despot they will merely wag their fingers at, or which popoulation they will actively engage in protecting, whatever form that tangible support and protection may take.

From Front Page Magazine comes an excellent article clearly detailing the perils of 'civil war' in countries seemingly unrelated, and with no consequence, to us in the west, and specifically, of no concern to America:

A Tale of Two Civil Wars

The Syrian civil war is now more than a year old. The Syrian army has killed some 10,000 people—and counting. Although Damascus has made promises about ceasefires and diplomatic settlements, it’s not in Bashar Assad’s DNA to countenance any challenge to his rule. Recall that his father slaughtered 20,000 Syrians to staunch a 1982 uprising. The younger Assad’s army—what one observer describes as a “hellish killing machine”—is on its way to eclipsing that grisly milestone. For instance, Assad’s henchmen ushered in this week by attacking refugee camps, firing across the Turkish and Lebanese borders, and making a mockery of the latest UN peace plan. In response, President Barack Obama has offered little more than promises of non-lethal aid and intonations about establishing “a process” to transition to a “legitimate government.” Inaction in the face of such butchery is easy to criticize, of course. Since America cannot intervene everywhere, presidents have to draw the line somewhere. But it’s difficult to understand why the president has chosen to draw that line at Syria, especially if we consider Obama’s response to the Libyan civil war just one year ago.

Recall that in announcing his decision to intervene in Libya (by bombing Qaddafi’s forces), the president declared, “We cannot stand idly by when a tyrant tells his people that there will be no mercy, and his forces step up their assaults on cities…where innocent men and women face brutality and death at the hands of their own government.” [Yes, Brat emphasis ]

That sounds like a fairly accurate description of Syria. Yet this time around, there’s no help on the way for the rebels—at least not from Obama. Instead of a Libya-style air war, Obama’s reaction to Syria is beginning to look a lot like Washington’s non-response to the mangling of Bosnia almost two decades ago. As Senator Joe Lieberman recently observed, “I feel like we are reliving history.”...

Much more on this MUST READ here.

The question for me has always been: how can the politicians decide which countries they will support, and which countries the world turns a blind eye to - even as the blood running in the streets continues? Iran, Egypt, Israel, African countries, and yes, Iraq and Afghanistan. How often have we all heard the anti-war crew screech that "Afghanistan is not our war," or "Iraq is nothing to do with us. Let them kill themselves."

As we see, specifically, in those last two countries, what happens over there most certainly DOES affect us over here. As I have watched the Syrian death toll rise, I have been reminded of the echoes of Iraq, Iran, Israel, and yes, my beloved Yugoslavia, where the international community expresses "outrage" and politely tells each other, in oh so civil tones, how such murderous genocide is "unacceptable." Really?

But it is election season in America, and Obama and his fellow encumbents tread the minefield of US public opinion carefully, as they dredge for votes. Election season in America, where the oh so 'civilised' discourse descends - as usual in the age of Obama - into very UNcivil electioneering. How else to explain the apparent ignoring of desperately dying civilians outside America?

We have seen the Obama regime loudly trumpet to a war-weary American population the end of the war in Iraq. We watched incredulously (well some of us!) as Obama sent the terrorists in Afghanistan a very public memo of the withdrawal date of our troops there, which reassures the thugs that they only have to wait us all out, and make sure the door is closed behind us, as they get back to their own UNcivil civial war. Think I jest? Iraq, anyone? But hey, Obama said the war in Iraq was over, so the almost daily suicide bombings/murdering of innocents in that country no longer garner front page msm ink...

So back to Syria which will no doubt fade from the front pages of our msm, as Obama et al falsely claim that 'diplomacy has worked. Re-elect me, because I am the smartest (most civilised) man in the room...' Riiiight.

I am sure that will be a huge comfort to those Syrians who have died since March 2011.

It is said that those who ignore history are doomed to repeat it. What is happening in Syria is yet the latest example of that truism. Anybody who actually believes that Assad will quit murdering his own citizens (the same folks who think that because Iran is no longer front page news, that Ahmajinedad has stopped torturing and murdering those citizens) is choosing to remain wilfully ignorant.

Ignorance may be bliss for some, but in this day and age - and especially with the current crop of politicians in the west - to be determinedly, wilfully ignorant is not only immoral, it is also extremely dangerous. It is dangerous not only to those in places like Syria, Iran, Israel, etc etc etc who run the gauntlet of murder and mayhem on a daily basis, but it is dangerous for all of US. Really, it is.