A Training and Adventure news article

Royal Navy medics have been sharpening their skills in the field in preparation to support 45 Commando Royal Marines lead the UK's response to unexpected global events. 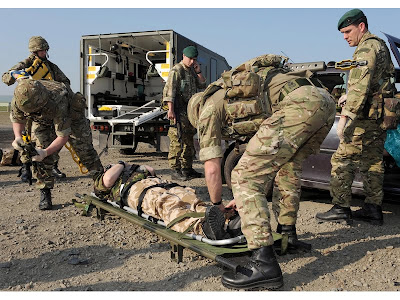 Under Exercise Green Serpent, lessons learnt by Royal Navy clinicians and ground medics while deployed in support of operations in Afghanistan were brought to the Royal Marines Base at Chivenor as they put their mobile medical facility to the test for future operations.

Called the Commando Forward Surgical Group (CFSG), the advanced field hospital treats casualties brought in from medics on the field before sending them to a standard hospital for more extensive treatment.

Royal Navy clinicians deployed at National Health Service (NHS) hospitals around the UK could be called forward at short notice to support the CFSG which boasts an accident and emergency department, a surgical room with two operating tables and an intensive care unit. There is also a laboratory for testing blood and an ability to provide a limited number of transfusions.

"The idea of having a highly mobile hospital facility is that we can get it put up and taken down within an hour - allowing us to get our surgical teams as close to the fighting troops as possible....

There is more, plus pictures, here.