One of our Finest: Chaplain Assistant SPC Annette Daniel 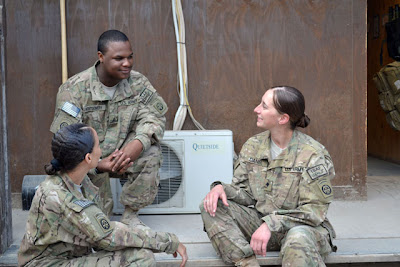 
LOGAR PROVINCE, Afghanistan– In an environment where operations never seem to slow and everyone is on constant alert, Soldiers very often begin to feel the effects of a sometimes chaotic and always demanding profession.

In combat, there are no weekends or holidays, Soldiers are running operations 24/7. For this reason, it is important to have people whom a Soldier can talk to at any time and who can be supportive, understanding and ready to listen. At Task Force Corsair, one of these very special people is U.S. Army Spc. Annette Daniel.

“Sometimes Soldiers just want to be heard. They want to know that someone wants to listen and understand what they are saying. That’s where I come in, I want to hear and understand them,” said Daniel.

Daniel, a 21-year-old Soldier from Tiffin, Ohio, is a chaplain assistant and part of the Unit Ministry Team with Task Force Corsair. Daniel said she became a chaplain assistant because she wanted to make a difference in the lives of Soldiers. When speaking with Daniel, it’s obvious that her profession is a perfect fit; she is engaging, personable and has a warmth that elicits comfort and trust....