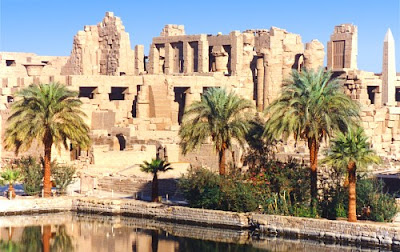 
Although no specific group has immediately claimed responsibility, this attack is but the latest in the litany of non-muslim sites being destroyed in the ongoing campaign of cultural genocide.


A suicide bomber attacked an ancient temple in the Egyptian city of Luxor on Wednesday, a top tourist destination.


Officials said police also foiled two other attempted suicide attacks at the sprawling Karnak temple, which lies on the east bank of the Nile and is visited by millions of foreign and Egyptian tourists each year.

There was no immediate news on casualties. Egyptian media reported that two attackers had been killed, said the BBC. Officials spoke on condition of anonymity because they were not authorized to speak to the media....
[...]

There was no immediate claim of responsibility for Wednesday's attack, but it bore the hallmarks of Islamic militants who have been battling security forces in the strategic Sinai Peninsula for years.

Extremists in Sinai have targeted tourism sites to try to deny the government a key source of revenue. Last year, the Sinai-based insurgent group Ansar Beit al Maqdis pledged allegiance to the Islamic State group, which has destroyed famed archaeological sites in Syria and Iraq, claiming they promote idolatry....