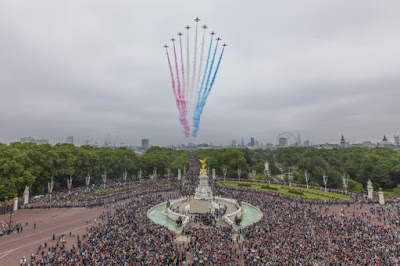 The Red Arrows fly over Buckingham Palace as crowds celebrate the Queen's official birthday. One thousand one hundred soldiers from the Household Division were joined by almost 250 immaculately groomed military horses, six blindingly polished First World War 13-Pounder Guns and 350 military musicians at the ancient annual ceremony known as Trooping the Colour at Horse Guards Parade. The Royal family watched from the balcony of Wellington’s office, and more than 8,500 guests including the Prime Minister, foreign dignitaries, and Defence Chiefs of Staff, filled the stands on Horse Guards, while tens of thousands of the public lined the route, as The Royal Colonels: The Duke of Edinburgh, The Duke of Kent, The Prince of Wales, The Duke of Cambridge, and The Princess Royal, accompanied Her Majesty in stately procession down the Mall to inspect the Parade.( (c) MOD)