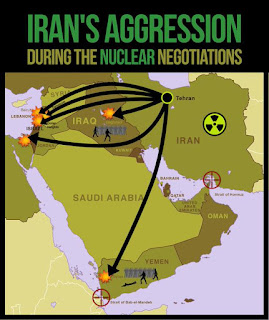 I know, I know, I was just as shocked as anyone to read about the 'deadline' to this 'agreement' being extended..  Who'd a thunk THAT?

Iran Deal Deadline May Be Pushed Back


West pressuring to push deadline back in order not to give Iran an advantage in final terms of a nuclear deal.


Western powers involved in nuclear talks with Iran may delay the deadline for a final agreement beyond June 30, it was revealed Friday, in order to prevent Iranian stalling from benefiting the Islamic Republic.


“The Iranians are using delay tactics. It seems they want to come close to the deadline without an agreement,” Energy Minister Yuval Steinitz (Likud), who has been given responsibility for the Iran issue, stated to Politico. "There will be no time to close all the loopholes and clarify all the details. And this will serve the Iranians.”

The sides signed a framework deal on April 2, but are under pressure to formalize a final deal by the end of this month.


However, significant gaps remain and any progress has been incremental, political analysts and sources involved in talks stated - including when and how economic sanctions will be lifted, whether they will be rolled back, and when and how nuclear inspectors will visit Iranian facilities.


Progress has been stalled further by US Secretary of State John Kerry'sbiking accident on Sunday amidst a series of contentious talks with Iranian Foreign Minister Javad Zarif. One Brookings Institute advisor stated that little to no progress had been made since April between the two.


To compound the problem, US President Barack Obama has been hiding his draft of the Iran deal despite multiple requests to see the terms from Senator Bob Corker (R-TN), who is chairman of the Senate Foreign Relations Committee....

Many more details - and video - here.

Watch for the red crayons.
Posted by The Brat at 2:09 AM