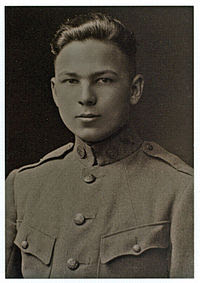 CPL Frank Woodruff Buckles, 110, of Charles Town, West Virginia, last surviving U.S. veteran of World War I, died at 12:15AM, 27 FEB 2011. He will be buried at Arlington National Cemetary at a date to be determined, with special Honors from the French and United Kingdom. President George W Bush signed a bill sponsored by U.S. Rep. Shelley Moore Capito, WV, for the burial at Arlington in 2008.

Cpl Frank Buckles was one of the first Every Day Heroes I profiled over at Tanker Bros.

WASHINGTON (CNN) -- Frank Woodruff Buckles was just 15 years old when he joined the U.S. Army. Soon, he was deployed to war and headed overseas on the Carpathia -- the same ship used in the rescue mission of the Titanic.

World War I veteran Frank Buckles entered the Army at age 15. "I didn't lie," he said with a laugh this week.

He drove ambulances in Britain and France for soldiers wounded during World War I.

A few decades later, Buckles was in the Philippines as a civilian, on December 7, 1941, the day Japan attacked Pearl Harbor. He was taken as a prisoner of war for 39 months in Manila, eating his meals out of a single tin cup.

More than 60 years later, he still clings to that cup, the one that sustained his life. Weathered with age, the cup has flecks of white paint chipped off. He keeps it as a reminder of his sacrifice for the country he so loves. He also still has his dog tags.

At age 107, there's not much the war veteran, POW and West Virginia farmer hasn't seen. But this week, this quietly accomplished man was humbled.

Buckles, the last known surviving World War I U.S. veteran, met the president of the United States and received a standing ovation at the Pentagon.

"I didn't lie; nobody calls me a liar," he said with a chuckle, referring to how he became a soldier at just 15....


Go here to read the rest of the story about this amazing man being recognised, acknowledged by President Bush. 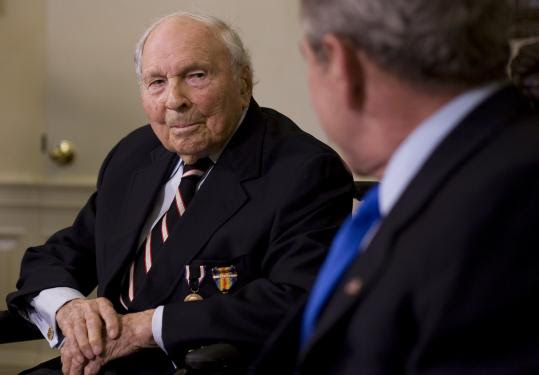 Did you know that WW1 veterans still have no national memorial in America? I did not, until I read the following story:

WASHINGTON - World War I veterans still have no national memorial. There has been no Hollywood blockbuster in recent years to bring their story to life. But they still have Frank Buckles.

More than 90 years after he fudged his age to join the Army, Corporal Frank Woodruff Buckles, the last surviving American veteran of World War I, came to the Pentagon yesterday to represent the more than two million "doughboys" who braved the trench warfare and gas attacks of the "The Great War."

"It is an honor to be here to represent the veterans of World War I. I thank you," the 107-year-old Buckles, of Charles Town, W.Va., told a packed auditorium. Buckles spoke softly but clearly, and shared stories - including a meeting with General John J. "Black Jack" Pershing.

Defense Secretary Robert M. Gates unveiled portraits of Buckles and eight other veterans who were photographed over the past 18 months - but seven have since died, and the eighth served with Canadian forces.

At 16, Buckles sailed from Hoboken, N.J., in December 1917 on the HMS Carpathia, the ship that saved Titanic survivors five years earlier. He drove an ambulance in England and France and later guarded German prisoners...

Be sure to go read the rest of this story here. And, please watch part 2 of the above Outlook programme:


What an amazing hero! And yes, you KNOW the President had something to say to Cpl Buckles:

THE PRESIDENT: Sitting next to me is Mr. Frank Buckles, 107-years-young, and he is the last living Doughboy from World War I. And it has been my high honor to welcome Mr. Buckles, and his daughter, Susannah, here to the Oval Office.

Mr. Buckles' mind is sharp, his memory is crisp, and he's been sharing with me some interesting anecdotes. I asked him where he lived, and he said, that reminds me of what General Pershing asked me. And he told the General that he was raised on a farm in Missouri. And the General said, well, you know, as the crow flies, it's 40 miles from where I was raised.

And so Mr. Buckles has a vivid recollection of historic times. And one way for me to honor the service of those who wear the uniform in the past and those who wear it today is to herald you, sir, and to thank you very much for your patriotism and your love for America.

So we're glad you're here. Thanks for coming. (Bratnote for 28.2.2011: The source for this was on the White House official site. Quelle surprise, or maybe not, but this page is now designated "404. Page not found")

America is blessed to have such men as Cpl Frank Buckles in their midst. Thank YOU for your service, Sir! (all originally written on March 16, 2008)

Rest in Peace, Sir! America is the poorer for your passing.