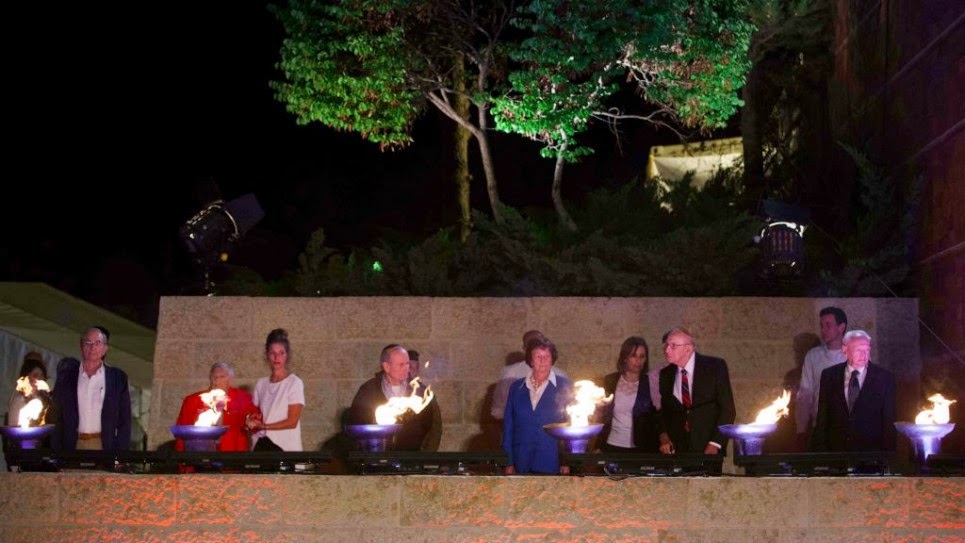 From The Times of Israel

Mengele twin, Hagana fighters, and a ‘mute’, among survivors honored

When the annual Holocaust Martyrs’ and Heroes’ Remembrance Day begins Wednesday evening, the official start of the 24-hour-long period is marked with a ceremony at Yad Vashem, Israel’s official museum commemorating the Holocaust.


[...]one of the most poignant and uplifting parts of the ceremony is the lighting of the torches in memory of the six million who perished during the Holocaust.

The torches are traditionally lit by six survivors who suffered through the travails of the Holocaust but managed to emerge alive and make their way to Israel, then just a fledgling state.

“The torchlighters really symbolize the six million victims and the survivors,” said Estee Yaari, a spokesperson for Yad Vashem. “It’s their personal stories that we are able to connect with, that create an emotional connection for many people.”...

'The World Has Not Learned the Lessons of the Holocaust'

"We stand here tonight, in painful silence at Yad Vashem, in Jerusalem, the capital of Israel, on the eve of Holocaust Memorial Day," Rivlin began.  "Exactly seventy years since April 15th 1945, a Sunday afternoon. The day when the first British soldiers crossed the gates of the Bergen-Belsen concentration camp."

"The joy of liberation was replaced by horror," he said. "The horror that was revealed before their eyes was inconceivable.  In the camp, lay thousands of bodies.  In March 1945 alone - a few weeks before the camp was liberated - eighteen thousand, one hundred and sixty-eight people died at Bergen-Belsen; most of them Jews, men, women and children, some of them nameless."

"Fourteen thousand people died of hunger and disease during the first five days after the camp's liberation," he noted. "In the barracks were sixty thousand men and women, most of them sick, in a serious condition."

"They could not move. They lay in the bunks, starving, thirsty, exhausted and sick. The living dead.  Their families were murdered, burned, slaughtered, or disappeared," he described. "They lost everything.  Each was sure they were ‘The Last Jew’."  ...

“Seventy years ago the bells of freedom rang across the world," he began. "The terrible nightmare in Europe came to an end.”

"The victory against the Nazis was not only a day of rejoicing, it was also a terrible day of sadness [...] and a day of self-reflection to world leaders," he continued. " World leaders understood that they now had an opportunity to rebuild a society based on freedom.”

Netanyahu connected the policy of appeasement of world leaders, then in the League of Nations, to the current Iran deal - and implicated that much of the West, in this sense, has not learned from the Holocaust.

“Democracies cannot turn their eyes away from the dictatorships of the world that seek to spread their influence," he insisted. “Ahead of World War II, the world attempted to appease the Nazis. They wanted quite at any price, and the terrible price did come.”
Netanyahu said that, similarly, "nothing is being done" about Iran.
"Appeasing tyrannical regimes will only increase their aggression and is an approach that is liable to drag the world into larger wars," he warned. [emphasis mine]
[...]
“We will continue to work towards opening the eyes of the world” to Iran, he said. “Even if we will be forced to stand alone, we will not falter. We will maintain our right to defend ourselves… we will not let the state of Israel become a passing phase in the history of our nation.”...