Video:Op/Ed - Hillary Clinton is not MY champion 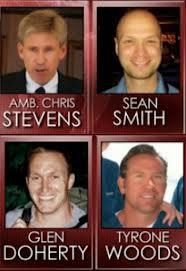 Hillary Clinton wants to be your champion.    Yesterday,  continuing her usual MO of avoiding having to answer questions with an uncontrolled mainstream media rabble, Hillary released a video to announce she is - again - running to be the Democratic nominee for the 2016 Presidential election.

Hillary Clinton wants to be your champion but when asked to name any achievement from her years as SecState, she (and any of her allies) struggles to present even one.

Hillary Clinton wants to be your champion but obviously fails to see the irony of using the very same tool to announce, as she blames for that 'spontaneous demonstration' in Benghazi.

But really, 'what difference, at this point,  does it make?'

The list is long of events - and unanswered questions - from Mrs Clinton's life, that should disqualify her from any future public office in the US. In my opinion, the most egregious is the unnecessary murders of the four brave Americans we lost in Benghazi.  On their deaths alone, never mind Clinton's default position when questioned about that, of faux indignation, should keep the Oval Office doors locked against her.

Never mind.  If the litany of Hillary's qualities that should make her ineligible for POTUS is raised, your wanna-be champion Hillary - unless your name is Chris Stevens, Sean Smith, Glen Doherty or Tyrone Woods, of course -   does have one qualification that nobody can argue with.

Yes, some day I would love to see an accomplished, ethical, patriotic female President of the United States; you know, one who follows the Constitution,  but Hillary Clinton ain't it, not now, not ever.

Back in 2007 when then  Senator Obama  began his never-ending electioneering,  any of us who pointed out his lack of qualifications for the highest political office in the US were labelled racist.  On this very site, I had a wonderful collection of unpublished comments wrapped in one word:  RACIST!

I can absolutely guarantee that now Mrs Clinton has finally made her POTUS aspirations official, the Hilbots will be lurking in every corner ready to scream shrilly  "SEXIST"  if anybody dares to question why Mrs Clinton is entitled/fit to be elected.

In another of life's little ironies, despite all her proclaimed education and connections, if all else fails Hillary cynically  falls back on the old 'I have a vagina, so vote for me.'  Feminists everywhere should be proud..

Dear old Hillary may be channeling Helen Reddy, but it is this female writer's fervent hope that all voters reject Hillary Clinton's blatantly cynical grab for power, and deny her their votes.
Call me sexist if you think that would achieve anything, but really, that absurdity will only make me laugh.

There ARE amazing American women who have proved their patriotism, their ethics, their qualifications to Serve as POTUS.  Any one of them would be 'champion.'

Those Heroes, and ALL Americans,  deserve far better.

[Related:  Hillary Clinton is only out for herself

Email ThisBlogThis!Share to TwitterShare to FacebookShare to Pinterest
Labels: 2016 US election, Benghazi and Clinton, Hillary Clinton a champion?

Hillary embodies what America has become. Any questions?