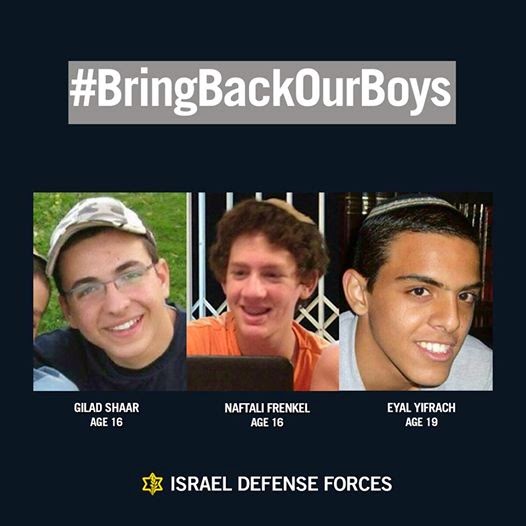 Golda Meir once said  'Peace will come to the Middle East when the Arabs love their children more than they hate us.'...

As Israel searches for the boys kidnapped, Muslims celebrate the kidnapping.

This is beyond the banality of evil. It’s the celebration of evil.

Islamic Jew-hatred — it’s in the Quran. It speaks volumes about a culture, giving out sweets and candy ……. that would celebrate the Arabs Celebrating Kidnapping of Jewish Children

Palestinian Unity Government Arabs have been celebrating the kidnapping of the three teenage boys.
They are handing out sweets and cakes.

On social media sites they are praising the kidnapping of the boys.

It’s all very reminiscent of how they celebrated when the Twin Towers were destroyed in New York on 9/11....

Ten days since the boys were kidnapped; ten days since their parents spoke to them. Israel continues to pray, to hope. The parents set the tone, that is their right. They have not lost hope - more likely the opposite. Each brief glimpse is of three united couples, determined to see their sons again.

Each message is one of faith and trust. They trust the army and the government of Israel to bring their boys home. They believe that with prayer, miracles will happen.


I said their names in prayer over Shabbat and checked the news. The army is on the move in so many areas. I know personally at least two of the soldiers who are in action now, searching, working. But there are thousands more....

Golda Meir had it right.  As Israeli Mother says:  'the world has gone crazy....' and it has long been my belief that unless and until we squash the religion of peace, the craziness will escalate.

As we all watch and wait, I continue to pray with Israel.

[Related from IDF blog:  Hamas Indoctrinates Palestinian Youth after Kidnapping  ]
Posted by The Brat at 3:41 AM