We have all seen the many pictures of kids being warehoused in US towns after they have ILLEGALLY entered the US unaccompanied - bringing with them swine flu and goodness only knows what other threats. 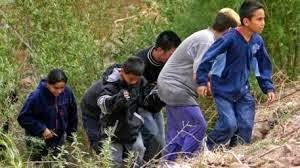 The U.S. Customs and Border Patrolhas apprehended more illegal immigrants in the Rio Grande Valley in the first eight months of fiscal 2014 (160,000) than it did for all of fiscal 2013 (154,453). Last May, agents apprehended over 1,100 illegal immigrants per day in the Rio Grande Valley. Texas officials have now authorized the Department of Public Safety(DPS) to send additional law enforcement personnel to patrol areas along the Texas-Mexico border at a cost of $1.3 million each week for the remainder of the year. Some residents compared the proposed surge, announced last week, to 2013’s Operation Strong Safety, which, these residents say, resembled a police state which created ghost towns along the border where illegal immigrants became afraid to go to work or send their children to school for fear of deportation.

“Securing the border is absolutely critical, and never before have we ever had so many people boldly coming across,” said State Representative Debbie Riddle (R-Tomball). “They cross the border, sit down and just wait for border patrol to pick them up.”

CBS News reports that some residents compared the proposed surge, announced last week, to 2013’s Operation Strong Safety, in which DPS agents patrolled border towns to identify illegal immigrants. Residents of the towns said the operation resembled a police state and blamed it for creating ghost towns where illegal immigrants became afraid to go to work or send their children to school for fear of deportation.

“There was a large outcry from the community because, quite frankly, right here on the border we live with a number of people who are — to be blunt — not citizens. And this has been the way of life down here for hundreds of years,” said former State Representative Aaron Pena (R-McAllen). “Last time they initiated a surge, they flooded the area with more personnel. They had set up checkpoints in various places in the Valley that were somewhat controversial because we have a number of families where the kids are American, but the parents are not Americans and so a lot of people avoided the roads.”

Email ThisBlogThis!Share to TwitterShare to FacebookShare to Pinterest
Labels: Illegals in TX