Just because I love Red Arrows. 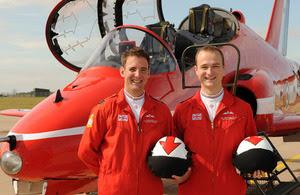 The 2 newest members of the Royal Air Force Aerobatic Team, the Red Arrows, for 2014 have been announced.

Flight Lieutenants Stewart Campbell and Joe Hourston, who have both previously flown operations with the RAF in Afghanistan, will stay with the Red Arrows for 3 years.


They will begin training in the coming weeks and will be part of the aerobatic team’s famous 9-aircraft formation in 2014 – displaying in front of millions of people at home and overseas and representing the speed, agility and precision of the Royal Air Force.


Flight Lieutenants Campbell and Hourston are joining the Red Arrows after impressing during a tough selection process that involved flight tests, interviews and other exercises.


The team is the public face of the Royal Air Force and assists with recruiting into the service, contributes to defence diplomacy and supports wider national interests by promoting the country’s industry.


Next year is the 50th display season for the aerobatic team which, since its formation, has performed more than 4,500 displays in 54 different countries....