Your Monday Mission: Support this Veteran

Not a week goes by that we don't hear about our Veterans having to deal with discrimination (and sometimes outright illegal actions) as  they reclaim their lives post-deployment.  In the US, Britain, and Canada, to name but three countries, our Veterans are having to fight the good fight, not just with the various levels of government and politicians, but also at street level.  Remember the Brit soldiers who were refused entry into Harrods because they were wearing their uniforms - on Remembrance Day, of all days!? Remember the Brit soldiers who were refused service in a pub - again because they were wearing their uniforms - they were just home from a sandbox!?   Remember the incidents in the US - the most recent of which was a Veteran with his Service dog refused entry into a restaurant??!

These are but a few of  the  many examples, of what seem to be almost weekly encounters where our Veterans are met by ignorance AND a disrespect of our returning Troops.

Today?  From the CBC comes this: 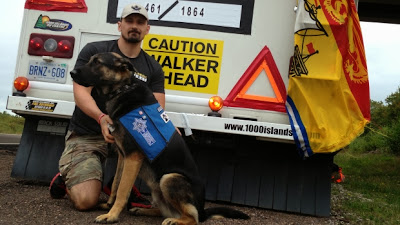 Kevin Berry was diagnosed with post-traumatic stress disorder in 2010, six years after his military service with the 3rd battalion of the Royal Canadian Regiment in Kabul. (Jessica Doria-Brown/CBC)
A former soldier, who now lives in Vancouver, is filing a complaint with the New Brunswick Human Rights Commission against a Moncton fitness club.

Kevin Berry, 30, served in Afghanistan and says he suffers from post-traumatic stress disorder. He travels with his service dog Tommy to help him cope with his PTSD symptoms.

"Tommy wakes me up during nightmares, Tommy walks in and clears my house when we get home," said Berry.

Last week, Berry and Tommy were passing through Moncton as part of a walking tour between Nova Scotia and Ontario to raise awareness about post-traumatic stress disorder.

Berry says they went to Global Gym on Mapleton Road so he could work out, but were denied entry even though Tommy wears a service dog vest and comes with a government-issued ID card.

Berry says after being denied entrance by a club employee, he contacted the gym's owner by telephone. He says the man laughed at him and said he'd never allow pets at his gym.

"My human rights were violated by the staff at Global Gym and the ownership," said Berry. "It wasn't just the injury, [there was] definitely an insult aspect to it after speaking with the owner on the phone."

Yes, it is totally unacceptable and yes, there is MUCH more here,

It seems to me we need to educate this Global Gym owner.  In the CBC story, they do not have any contact info for this business, but they do have their address and phone number on a FaceBook page .

I DO have the owner's private telephone number, but because I'll show him more respect than he showed for this Veteran, I won't share it here.

However, I AM asking each of you to do what YOU can, with the information given, to take this opportunity to educate this business owner, and show tangible support for Kevin.

You have your mission:  Release the hounds..

How can people be so dumb? No one knows what another goes through and even if it is not their business to know, you can tell by the ID card, the vest etc that service dogs are service dogs.