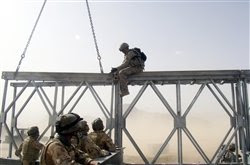 Insurgent attacks during the summer left the bridges impassible, forcing Afghans and coalition forces to use single-lane bypasses.

Work progressed quickly once the Australian and American combat engineers arrived. The first bridge in Andar was erected in just over two days, and forces then moved on to Moqur, where they emplaced the second bridge.

Both bridges are on Highway 1, which connects in southern to the Afghan capital of . Highway 1 is a paved route originally built in the 1960s. The 300-mile stretch that includes the bridges was refurbished in 2002 and 2003 as part of President Bush’s Afghanistan Road Initiative. The U.S. Agency for International Development credits the work with reducing the transit time between and by half....

Read the rest of this B*N*S*N story here.

Email ThisBlogThis!Share to TwitterShare to FacebookShare to Pinterest
Labels: B*N*SN