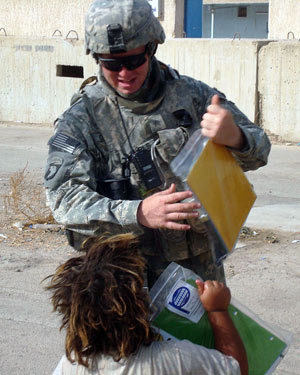 BAGHDAD — Anxious but appreciative orphan children in the Salhiya District of Baghdad had something to smile about when Multi-National Division – Baghdad Soldiers arrived, Aug. 13, to hand out school supplies as part of an assistance mission named “Operation Iraqi Children.”

During the engagement, Soldiers from the 18th MP Brigade lent a hand in the delivering of the school supplies to the local orphanage, as Soldiers from the 42nd Field Artillery Regiment and policemen from the Salhiya Iraqi Police teamed up to help the children prepare for school.

Operation Iraqi Children, which began in 2003 and was founded by Laura Hillenbrand and Gary Sinise, is designed to distribute donated school supplies to needy children in Iraq, Afghanistan and Djibouti.

The IP and MND-B Soldiers will hand out more than 3,000 school supply kits that were donated to the children in Baghdad. The kits contain: a pencil bag, composition books, notebook paper, colored pencils, large eraser, a small pencil sharpener, pencils, ruler and scissors.

“The kits have been a huge hit with the local children,” said Capt. Nate Brookshire, 716th MP Bn. “The kits have also given the maneuver units and Police Transition Team a positive avenue to interact with local children with our Iraqi counterparts.”

The 716th PTT has handed out more than 400 kits since mid-July to the children in Salhiya while on community policing patrols with the Salhiya IP...

So many GREAT stories - so little time to tell you them all. And that really IS B*N*S*N!