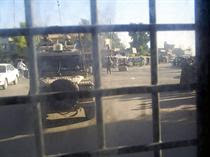 The first visit to Afghanistan by the Ministry of Defence Police (MDP) has seen officers help train newly-qualified local police in some of the most dangerous locations in Helmand Province.

The six month deployment by the MDP to Afghanistan was spent building the capacity of their Afghan counterparts in a major push to bring rule of law to the country.

The first six MDP officers have returned this week having helped train the Afghan officers in southern Afghanistan, including the towns of Lashkar Gah, Musa Qala, Gereshk and Sangin.

Royal Military Police officers have also been running courses at the British Headquarters in Lashkar Gah, where the bulk of training and mentoring takes place.