Baby Mikey Ferschke and his mother need YOUR help 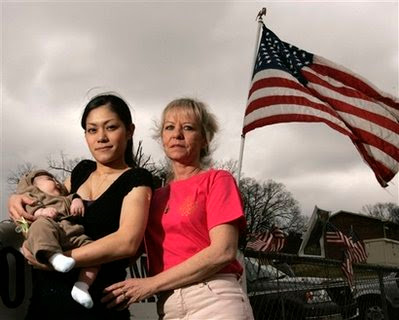 A Marine's Japanese widow is fighting to raise her son in the nation her husband died protecting. Hotaru Ferschke and Sgt. Michael Ferschke had a proxy wedding, filing marriage papers after he deployed. He was killed in Iraq. Now U.S. immigration refuses to acknowledge the marriage. Here, Hotaru Ferschke stands with her mother-in-law, Robin Ferschke, and son Mikey. (source)

Robert Stokely, Gold Star Father, and my friend, sent out the following email to a few of us the other day:

http://news.aol.com/article/marines-widow-hotaru-ferschke-denied/673890?icid=main|main|dl1|link3|http%3A%2F%2Fnews.aol.com%2Farticle%2Fmarines-widow-hotaru-ferschke-denied%2F673890
I can not add to what this story says except to say where I come from you don't mess with our women and you don't mess with our children. How can our government possibly, even remotely, do this. We must fight, and I mean literally fight if need be, for this wife and child, for a Hero died to give us not only the right, but the duty to do so.

My boy was a CAV Scout; my great great grandaddy was a cavalryman himself. I am not. But, I can yell charge and will fight. CHARGE!!!!

And I am joining this fight. Others have already. Over at BlackFive, they have the story up, with information on who to contact, and how we need to resolve this issue.

A Marine's Japanese widow is fighting to raise her son in the nation her husband died protecting. Hotaru Ferschke and Sgt. Michael Ferschke had a proxy wedding, filing marriage papers after he deployed. He was killed in Iraq. Now U.S. immigration refuses to acknowledge the marriage....

Read the rest, and check out the contacts here. I understand that Hotaru is stuck in legal limbo because of some anachronistic laws on the US books to do with proxy wives. That law was designed to weed out marriages of convenience for those who married just to gain US citizenship. That is NOT the case for Hotaru. From all I have read, Hotaru and her husband, Sgt. Michael Ferschke, were living together, were a partnership in every sense of the word, for a year or more in Japan, where they met. And oh yes, they obviously consumated the marriage. Mikey is proof of that.

Take a look at this:

This family deserves to be here in the country their loved one died serving. Hotaru has already more than earned the right to raise Mikey - the son of a fallen hero who gave his all for America - in the land of his father. Mikey's grandparents need to be part of this child's life.

In the comments at B5, one caller was told that right now the focus for the politicians is all about the healthcare/reform legislation. THIS bill - details of which I found somewhere else, and which you can find details of here - is long overdue:

The House sure could fast track Joe Wilson's case. No reason for this bill to
languish for months in committee.

"Cosponsors are prohibited under the rules on private bills, but have appeared
from time to time." 'tis time.

Let your Reps and Senators know the bill number.

Seems to me that if BO's aunt can maintain a residency status in America; if who knows how many untold illegals can set up home in America without fear of being shown the door - the very LEAST America can do for this family, is to welcome her and their baby boy as full American citizens.

You know what to do. Call everybody you can think of on this one. This family matters.

Thanks Aunty Brat, I cross posted it at our place, too.

We have Frisco acting as a safe haven for illegals who kill our citizens, we have illegals availing themselves of our cash, our food, our health care, and our jobs, and the wife and child of one of our warriors who should be here is being denied? How can this be right? Can one of your blogs start a petition for all of us to sign which can be sent to these political idiots?