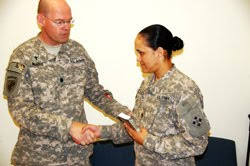 Deployed chaplains minister to ‘both sides of the world’

ARLINGTON, Va., (9/2/09) – For many chaplains, providing spiritual and mental support for Soldiers is a calling.

But, for one Minnesota Army National Guard chaplain, providing that care and support is only part of the equation. The real calling is that of being a Soldier.

“I’ve often said in sermons to Soldiers that I believe serving in the military is a call, and that it’s a call to be a peacekeeper or a peacemaker,” said Chaplain (Lt. Col.) John Morris, chaplain of the 34th Infantry Division, which is currently deployed to Basrah, Iraq.

“These phrases that we use like selfless service, which is a common phrase in the Army, it’s a vocational, religious connotation whether a person has a spiritual background or not. We’re calling them to self-sacrifice on behalf of other people.”

As he makes his rounds among the division’s units, Morris said he often talks to the Soldiers about sacrifice.

“Soldiering here at this time is a call to serve the Iraqis as well as serve the defense of our nation,” he said. “And to be willing to be that person in the middle to enable peace and enable conditions to happen in that a new country can be born, I often present that to Soldiers and they are often visibly moved and often encouraged by that.”

Spiritual support is important throughout a deployment, but it is especially needed when a Soldier is wounded or killed in action.

“From the time a Soldier is wounded and goes up to one of our medical facilities, we’ll do everything to get one of our chaplains up there if there is enough time,” said Morris. “A lot of times the Soldier will be evacuated so quickly to a higher level care that it will be a chaplain at that end, but there will be a hospital chaplain somewhere along the line.”

In such a case, the chaplains often work with more than just the wounded Soldier.

“A lot of times people forget that the commanders are tremendously affected by the injuries or deaths of their Soldiers.”

If there is a death within the unit, the chaplains have additional roles....

I love our Chaplains, and you can find more on this story here.