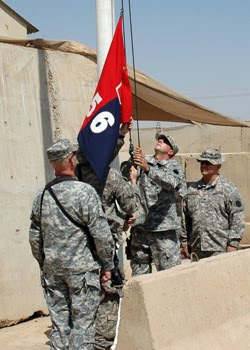 Commander Col. Marc Ferraro and Brigade Command Sgt. Maj. John Jones lowered the colors of the "Independence Brigade" in front of a crowd of Soldiers and Iraqi government and military officials.

"At the start of our mission I said, 'The citizen Soldiers of Pennsylvania have always answered the call to duty," Ferraro said. "They did just that.

"During the deployment, we remained focused on the mission. The Soldiers of the Independence Brigade served side by side with Iraqi soldiers to ensure security."

Ferraro told Iraqi officials present that the past eight months have demonstrated that Iraqi security forces in the Taji area will be successful in the future.