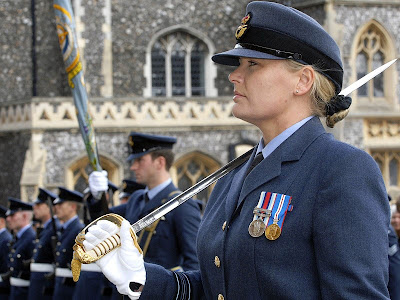 Having recently returned from operations in Afghanistan, Squadron Leader Amanda Martin-Smith has now become the first female from RAF Marham to take on the role of a Parade Commander.

Sqn Ldr Martin-Smith, aged 36, took command of the traditional parade in Norwich that marks the start of Battle of Britain Week.

She has recently returned from an operational deployment in Afghanistan where she was the Operations Wing Executive Officer within the NATO Headquarters at Kandahar Airfield.

Now the Officer Commanding Force Development Squadron at RAF Marham she has the responsibility for training and educating Service personnel in preparation for operations and ensuring that they are continually developed professionally and personally whilst in the service.

"I am incredibly honoured to command the Battle of Britain Parade in Norwich. We are proud to celebrate our heritage and recognise the bravery and sacrifices made by the aircrew and all the support personnel who contributed to air operations in WWII."

Originally from Devon, Sqn Ldr Martin-Smith, completed her RAF Officer training at RAF Cranwell in 1996 after graduating from Exeter University with a degree in Physics.
"We are proud to celebrate our heritage and recognise the bravery and sacrifices made by the aircrew and all the support personnel who contributed to air operations in WWII."

Coming from a proud Service family (her father completed 22 years as a Royal Marine Commando before joining the Army), she is exceptionally proud of her Service role in today’s Royal Air Force.

She was joined on the Parade in Norwich by the Band of the Royal Air Force College Cranwell, two flights of RAF Marham's Station Ceremonial Squadron and the Standards of II(AC) Squadron, IX(B) Squadron, XIII Squadron and 31 Squadron.

The City's residents and shoppers turned out in force to support the Parade. The Battle of Britain Memorial Flight based at RAF Coningsby, Lincolnshire provided the flypast with a lone Spitfire approaching over Norwich Castle....(MoD here)

Thank you for your service, Squadron Leader!