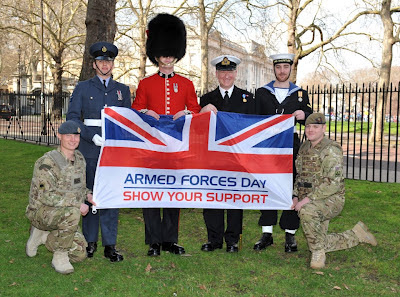 It's an opportunity to do two things. Firstly, to raise public awareness of the contribution made to our country by those who serve and have served in Her Majesty's Armed Forces, Secondly, it gives the nation an opportunity to Show Your Support for the men and women who make up the Armed Forces community: from currently serving troops to Service families and from veterans to cadets.

Across the country people are getting involved: communities hold local events and business show their support.

The National Event will be held in Plymouth, but there are many more events up and down the country being held in support of Armed Forces Day.

If you want to know more about the Army, Royal Navy, Royal Air Force or meet members of local units, then why not attend an event or hold one yourself? Find out how you can get involved and what's going on in your area so that you too can celebrate Armed Forces Day in support of our nation.

Much more info - with lots of pictures - here.