Some Gave All: Corporal Alex Guy

It is with sadness that the Ministry of Defence must confirm that Corporal Alex Guy, of the 1st Battalion The Royal Anglian Regiment, was killed in action on Friday 15 June 2012. 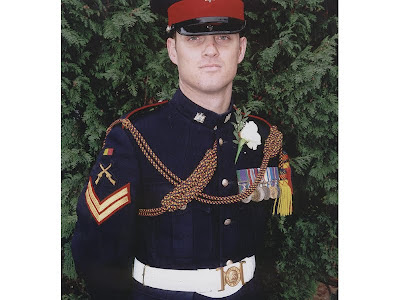 Corporal Guy, aged 37, commanded a fire support section in Nad-e Ali District of Helmand Province. His section was conducting a partnered patrol with elements of the Afghan National Army when they were caught in an insurgent ambush. Corporal Guy was leading his section forward to assist a group of Afghan soldiers who were pinned down by enemy fire when he was fatally wounded.

Corporal Alex William Guy was born on 13th September 1974 in Norwich and grew up in St Neots, Cambridgeshire. He enlisted into the British Army aged 18 and joined the 1st Battalion The Royal Anglian Regiment, 'The Vikings', in 1993. He was quickly identified as a talented young leader and was promoted to Lance Corporal in 1995.

In 2000 he was selected for training as a specialist in the Anti-Tank Platoon and was promoted to corporal in 2003. After a spell as an Army recruiter he returned to the Battalion in 2010 to begin preparations for deployment on Operation HERRICK 16. He deployed to Afghanistan in March 2012 where his section was attached to B Company of the Estonian Scouts Battalion, part of the 1 Royal Anglian Battlegroup.

During his nineteen years of loyal service he deployed on no fewer than eight operational tours, including Bosnia, Iraq, three of Northern Ireland and three of Afghanistan. He had also been recently selected for promotion to the rank of Sergeant.

Corporal Guy was a proud member of the Vikings, much loved by all who knew him. He was a natural soldier and a hard-working and popular leader who cared deeply about those in his charge. He threw himself into everything he did and his humble yet consummate professionalism set the example for others to follow.

He was a devoted husband to his beloved wife Emma and a friend to so many within the Regimental family. In every respect he embodied the strong family ethos of the Regiment and his loss will be mourned by all.

Corporal Guy leaves behind his wife, Emma, mother and father, Aileen and Andrew, and sisters Rebecca and Martha.

“Alex was born on Friday 13th September 1974 at the Norfolk and Norwich Hospital into a military family, as the family was stationed at RAF Coltishall at the time. We went to live in St. Neots in 1979 and Alex went to Bushmead Infant School in 1980.

“He was a happy, friendly child who loved joining in with any activities – in and out of school. He went to Ernulf Community School (now Academy) in 1986. As a teenager he was in the St. Neots RAF Cadets and loved it.

“He left school in 1991 and eventually decided to join the Army in 1992. The comradeship and discipline and ‘sense of family’ meant everything to him.

“He was a wonderful and loving son, husband, brother, friend and comrade.”

“Alex was kind. A happy, full-of-life and kind hearted man, with a passion for his work and family.”

“A gentle, kind-hearted, generous much missed son-in-law who was devoted to our daughter.”

Much more about this precious Fallen Hero here.