Diamond welcome for troops back from Afghanistan

Soldiers who fly and maintain the Army's Apache attack helicopters have been presented with the Queen's Diamond Jubilee Medal on their return from operations in Afghanistan. 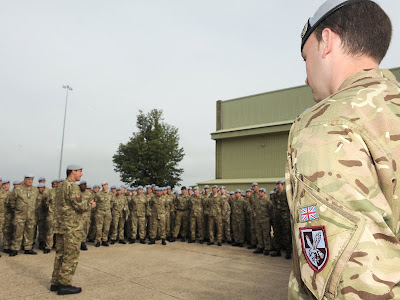 On Thursday, 31 May, the squadron paraded at Wattisham to welcome home its soldiers and to mark the Queen's Diamond Jubilee.

"It's been a very busy and rewarding tour but it's great to be back to our families, who have been really well looked after by the welfare team.

"It is an honour for the squadron to receive the Queen's Diamond Jubilee Medal as we celebrate our safe return from operational service. The medal recognises the service of the military to Queen and country, as well as that of the Queen for the country."

"The amount of engagements Apaches are involved in has remained fairly constant, but I can observe progress. The troops on the ground have stabilised the situation in Helmand, meaning they can set the tempo, and we're providing considered and focused support to operations to help improve security for local people."

For Apache pilot Sergeant Chris Hawkins this latest deployment was his second tour of Afghanistan, having retrained as a pilot since his first deployment as a signaller in 2006. He said:

"It's very different to fly the Apache rather than manning a radio in a tent.

"My ambition on joining the Army was to fly helicopters and before I deployed I'd done almost 300 flying hours during training which I've more or less doubled in Afghanistan.

"It was a very interesting experience and the infantry really appreciate the Apache because our presence is enough to deter things from happening on the ground.

"It's fantastic to receive a medal on our return as recognition of our service at a special time for the whole nation."

664 Squadron, also part of 4 Regiment Army Air Corps, has replaced 654 Squadron and will operate the Apache in Afghanistan for the next four months.

The Queen's Diamond Jubilee Medal is being awarded to all Armed Forces personnel with at least five years' service to celebrate the 60th anniversary of the Queen's accession to the throne.