It is with sadness that the Ministry of Defence must confirm that Corporal Michael John Thacker, from 1st Battalion The Royal Welsh, was killed in Afghanistan on Friday 1 June 2012. 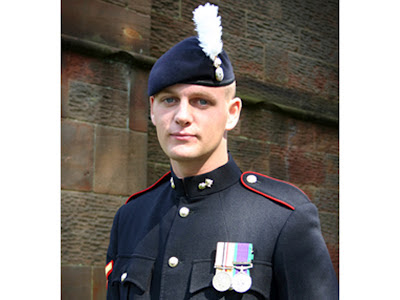 Corporal Thacker was part of the Fire Support Group manning Observation Post ‘Tir’ in the Helmand district of Nahr-e Saraj, when he was hit by small arms fire. He received immediate medical attention and was evacuated by helicopter, but sadly could not be saved despite the best efforts of medical staff.

Corporal Michael Thacker was born on 12 February 1985 in Swindon, Wiltshire. He attended Fairwater High School in Cwmbran, South Wales, before joining the 1st Battalion The Royal Welch Fusiliers in 2004. He deployed to Iraq on Operation TELIC 4 and then to South Armagh in 2005, before the Battalion was amalgamated to become 1st Battalion The Royal Welsh and moved to Cyprus in 2006. Corporal Thacker deployed on Operation HERRICK 16 as part of Combined Force Burma; returning to Afghanistan having served there on Operation HERRICK 8 and Operation HERRICK 11. He was a larger than life character and was extremely well known to the Battalion, Officers and Soldiers alike. His loss will be sorely felt.

Michael’s wife, Catherine, paid the following tribute to him:

“Michael was the love of my life. He was an amazing husband and father who will always be remembered as a funny, loving and kind man. Everyone who met Mike instantly liked him and through time came to love him.”

“Corporal Michael Thacker is my big brother and the best I could wish for. We were more than brothers, we were best friends and words cannot express how much he will be missed. Michael is one of those people who would help others before helping himself. He will be leaving behind his beautiful daughter, Millie, and his wife Catherine. Michael could light up a dark room, always making people laugh because of his great personality. Devastated can not come close to how we as a family are feeling. He died doing the job that we Thacker brothers love. He is a true hero. Rest in Peace. See you on the real ‘re-org’ bro. You will always be in my thoughts.”...

Go spend some time with those who love this Fallen Hero the most, here.