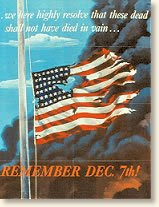 The surprise was complete. The attacking planes came in two waves; the first hit its target at 7:53 AM, the second at 8:55. By 9:55 it was all over. By 1:00 PM the carriers that launched the planes from 274 miles off the coast of Oahu were heading back to Japan.

Behind them they left chaos, 2,403 dead, 188 destroyed planes and a crippled Pacific Fleet that included 8 damaged or destroyed battleships. In one stroke the Japanese action silenced the debate that had divided Americans ever since the German defeat of France left England alone in the fight against the Nazi terror.

"At approximately eight o'clock on the morning of December 7, 1941, I was leaving the breakfast table when the ship's siren for air defense sounded. Having no anti-aircraft battle station, I paid little attention to it. Suddenly I heard an explosion. I ran to the port door leading to the quarterdeck and saw a bomb strike a barge of some sort alongside the NEVADA, or in that vicinity. The marine color guard came in at this point saying we were being attacked. I could distinctly hear machine gun fire. I believe at this point our anti-aircraft battery opened up.

"We stood around awaiting orders of some kind. General Quarters sounded and I started for my battle station in secondary aft. As I passed through casement nine I noted the gun was manned and being trained out. The men seemed extremely calm and collected. I reached the boat deck and our anti-aircraft guns were in full action, firing very rapidly. I was about three quarters of the way to the first platform on the mast when it seemed as though a bomb struck our quarterdeck. I could hear shrapnel or fragments whistling past me. As

soon as I reached the first platform, I saw Second Lieutenant Simonson lying on his back with blood on his shirt front. I bent over him and taking him by the shoulders asked if there was anything I could do. He was dead, or so nearly so that speech was impossible. Seeing there was nothing I could do for the Lieutenant, I continued to my battle station.

"When I arrived in secondary aft I reported to Major Shapley that Mr. Simonson had been hit and there was nothing to be done for him. There was a lot of talking going on and I shouted for silence which came immediately. I had only been there a short time when a terrible explosion caused the ship to shake violently. I looked at the boat deck and everything seemed aflame forward of the mainmast. I reported to the Major that the ship was aflame, which was rather needless, and after looking about, the Major ordered us to leave.

"I was the last man to leave secondary aft because I looked around and there was no one left. I followed the Major down the port side of the tripod mast. The railings, as we ascended, were very hot and as we reached the boat deck I noted that it was torn up and burned. The bodies of the dead were thick, and badly burned men were heading for the quarterdeck, only to fall apparently dead or badly wounded. The Major and I went between No. 3 and No. 4 turret to the starboard side and found Lieutenant Commander Fuqua ordering the men over the side and assisting the wounded. He seemed exceptionally calm and the Major stopped and they talked for a moment. Charred bodies were everywhere.

"I made my way to the quay and started to remove my shoes when I suddenly found myself in the water. I think the concussion of a bomb threw me in. I started swimming for the pipe line which was about one hundred and fifty feet away. I was about half way when my strength gave out entirely. My clothes and shocked

condition sapped my strength, and I was about to go under when Major Shapley started to swim by, and seeing my distress, grasped my shirt and told me to hang to his shoulders while he swam in.

"We were perhaps twenty-five feet from the pipe line when the Major's strength gave out and I saw he was floundering, so I loosened my grip on him and told him to make it alone. He stopped and grabbed me by the shirt and refused to let go. I would have drowned but for the Major. We finally reached the beach where a marine directed us to a bomb shelter, where I was given dry clothes and a place to rest." (source)

The names on the memorial wall tell a poignant tale of the price paid by their families....there were 37 sets of brothers assigned to the USS Arizona on the day it went down, including Delbert and John Anderson, one set of twins. The ship's crew included three sets of three brothers: Becker, Doherty and Murdock. One brother survived in each set. Twenty-three sets of brothers were lost that day.

There were a total of 77 brothers serving on the USS Arizona; 62 died as a result of the attack.

Thomas Augusta Free, from Texas, and his son William Thomas Free were the only father and son serving on the USS Arizona; they were killed in action as well. Kenneth and Russell Warriner were the only set of USS Arizona brothers who survived...

The plaque at the memorial is dedicated to the 1,177 men from the USS Arizona who gave their lives that day, most of whom are permanently entombed beneath the ocean waves.

"Dedicated to the eternal memory of our gallant shipmates in the USS Arizona, who gave their lives in action 7 December 1941. 'From today on the USS Arizona will again fly our country's flag just as proudly as she did on the morning of 7 December 1941. I am sure the Arizona's crew will know and appreciate what we are doing.' Admiral A.W. Radford, USN, 7 March 1950. May God make His face to shine upon them and grant them peace."

Salvaged from the floor of Pearl Harbor, the anchor of the battleship USS Arizona is displayed at the entrance of the USS Arizona Memorial Visitor Center operated by the National Park Service. The anchor was cast in Chester, Pennsylvania, and weighs 19,585 pounds. Photographer: Bill Dasher. Courtesy Impact.

The wake of a tour boat as it pulls away with visitors from the USS Arizona Memorial. Constructed in 1961, it was dedicated on Memorial Day, 1962. In 1980 it became a unit of the National Park Service. Photographer: David Thoresen. Courtesy Impact. (source for both here)

The ship's bell from the USS Arizona hangs in the tower of the University of Arizona Student Union building. The bell is tolled at the memorial services, held each year on the Sunday closest to December 7. This is one of two recovered. The other is at the memorial at Pearl Harbor. (source)

A history from the Navy here.