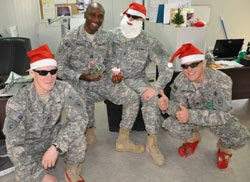 "I love doing stuff like that," said Wootten. "It made things more joyous. Even though we are all adults and understand the real meaning behind the holidays, it was like a little part of home out here with Santa and the elves passing out presents."...

Email ThisBlogThis!Share to TwitterShare to FacebookShare to Pinterest
Labels: Indiana NG as Santa's Helpers in Iraq