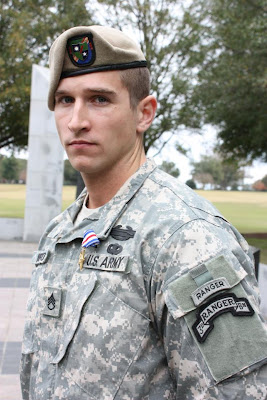 FORT BENNING, Ga. (USASOC News Service, Dec. 2, 2009) -- A squad leader with the 75th Ranger Regiment was awarded the Silver Star for risking his life to save two fellow Rangers in Afghanistan.

"Any Ranger would have done the same thing," said Staff Sgt. Michael E. Norton of Alpha Company, 3rd Battalion, 75th Rangers. "The Ranger Creed says, 'I will never leave a fallen comrade.' There was no moment of thinking about what to do. I had to get my brothers and the most important thing in my mind was how hurt they were."

Norton led his squad on an objective, Aug. 4-5, to raid an enemy combatant's headquarters camp in the mountains of northwestern Khowst Province in Afghanistan.

While moving to the objective, Norton and one of his team leaders were alerted to possible enemy combatants along the route and moved forward to assess the situation. As Norton and his team leader were attempting to identify the possible enemy in the valley, a seven to nine man enemy element initiated a complex, near ambush on Norton's squad from the high ground with rocket-propelled grenades and small arms fire from a position of 25 meters to the squad's front.

"The fire came from our 12 o'clock and then maybe a couple of seconds later from our right and left," Norton said.

Behind the first enemy rocket-propelled grenade team, a medium machine gun on elevated ground to the northwest engaged them with highly effective fire. Two more enemy combatants were on the slope of the valley to the west, engaged the Ranger squad with an AK-47 and rocket-propelled grenades along the long axis of their formation, while another group of enemy fighters were on elevated terrain to the east, raked them with small arms fire from the rear of the Ranger squad formation.

The multiple enemy positions had effectively enveloped Norton's squad from multiple directions at a distance of 25 to 50 meters, leaving Norton and his element pinned to the floor of the valley by the intense and accurate small arms fire.

The valley left no room for maneuver; Norton, his squad and the machine gun team element behind them immediately returned fire, but they were unable to gain fire superiority over the well-established enemy.

After the second rocket-propelled grenades knocked two of his Rangers temporarily unconscious and blasted the rest of his squad with shrapnel and debris and realizing his element could not gain fire superiority, Norton shouted for his squad to break contact.

When Norton realized that two Rangers had not gotten up and were still exposed to the heavy volume of enemy fire from the high ground to the east and west, and with complete disregard for his own safety, Norton turned around and with marked distinction, purposefully charged back into the interlocking fire of the enemy ambush kill zone in order to recover his downed Rangers.

"The example of personal courage that Staff Sergeant Norton showed, to get his men out of the kill zone is a testament to his character," said Maj. Keith Carter, A Company commander. "NCOs such as Staff Sergeant Norton are the reason I wanted to serve in the 75th Ranger Regiment, and it is an honor to lead them."

Without hesitation, Norton dove down into the midst of enemy fire with his unconscious comrades, uncertain of their status.

"There was nothing fancy going on in my head besides hoping they weren't dead," said Norton.

While the rest of the element attempted to suppress the enemy, and lying next to the Rangers, Norton "started shaking and yelling as quietly as I could."

After reviving his Rangers, Norton led them back to cover through the hail of direct fire and rocket-propelled grenade strikes, saving their lives and bringing his entire squad out of the enemy onslaught intact.

"I'm proud of the actions of my squad, because we continued the mission after that," said Norton. "It was just two minutes out of our overall mission."

As his platoon fought off the enemy ambush with direct fire, mortars and close air support, Norton quickly assessed his casualties and reorganized his squad to return to the fight.

"We receive a lot of great training here at 3rd Ranger Battalion and I was just acting on instinct," said Norton.

The training conducted by Rangers means everything on the battlefield.

"The goal of the company and battalion is to create the most realistic scenarios possible while minimizing risk," Carter said. We constantly integrate new enemy tactics from overseas into our training so that we are ready in any situation."

The overall assault force killed 20 enemy fighters, destroyed two enemy anti-aircraft guns and several other weapons, explosives and military supplies on the objective resulting in the disruption of a major enemy headquarters and encampment.

Norton joined the Army from his hometown of Pensacola, Fla., June 2004, after graduating from West Highland Christian Academy and has deployed six times in support of operations Enduring and Iraqi Freedom. He is the son of Jimmy and Deborah Norton of Holly, Mich.


Thank you for your service, Staff Sgt!
Posted by The Brat at 3:33 AM