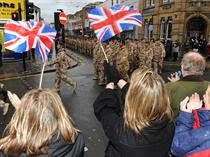 Crowds of well-wishers cheer soldiers of 4th Battalion The Rifles as they march through the streets of Salisbury [Picture: Adrian Harlen, Crown Copyright/MOD 2009]

450 soldiers from 4th Battalion The Rifles (4 RIFLES), who recently returned from a gruelling deployment to Afghanistan, were honoured by cheering crowds in Salisbury this week.

Led by the Band and Bugles of The Rifles, the soldiers, many in their desert combat uniforms, were met by cheering crowds of well-wishers who lined the historic city's streets as they marched proudly from the Cathedral Close to the Market Square for an inspection by the Mayor.

The Riflemen have recently returned to their barracks at Bulford after five successful but tough months in Afghanistan where they were part of the Election Support Force.

"It has been wonderful to see such large crowds turn up to support us despite the terrible weather. It means so much to every soldier to receive this welcome from the people of Salisbury."...

To read what they were doing, go read the rest of this great B*N*S*N story here.