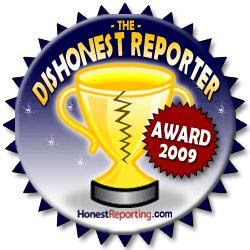 Yes, the list of names for the nominee of this award is long. We can all choose many so-called 'reporters' who could claim such a title. From Honest Reporting (UK) comes this:

Our annual recognition of the most skewed and biased coverage of the Mideast conflict.

This year, a four-letter word dominated coverage of Israel on a near-daily basis.

The war -- which began at the end of December in response to increased Palestinian rocket fire -- ended on the 20th day of the year.

The media war was dizzying. A prominent Greek weekly called Jews "Christ killers." Hamas terror leaders got soapboxes in prominent US and British papers. BBC Arabic hosted a wonk who justified the death of Israeli kids. Canadian and Aussie reporters had close calls with Qassams; Israel restricted media access to Gaza in large part because of the Hamas "CNN strategy." Al-Aqsa TV writers killed off Assud the Rabbit. And when Hamas fired a rocket from a foreign press building, an Al-Arabiya journalist's delighted reaction was caught on camera for YouTube posterity.

Perhaps the most definitive example of the spin games Israel confronted in the mainstream media was from South African editor Mondli Makhanya and his pernicious portrayal of Israel:

Israel's response to the "provocation" amounted to a steroid-pumped heavyweight boxer arriving to fight an anaemic midget armed with steel-lined boxing gloves.

All that was just January.

The rest of the year dealt with war crimes allegations, the Strip's closure, Hamastan, Gilad Shalit, issues surrounding human rights organizations (most notably Human Rights Watch and its staffer Marc Garlasco), the Goldstone Report, and, last but not least, floundering Palestinian unity efforts – which were impacted by the war.

As the first anniversary of Operation Cast Lead approaches, Israel and the Palestinians continue fighting over the very facts of the war. Most news outlets report that more than 1,000 civilians died in the war, but Italian journalist Lorenzo Cremonesi was the first to indicate that the casualty count was far smaller than what Palestinian sources present....

There are many other dubious awards listed. Go read them all, here.

Email ThisBlogThis!Share to TwitterShare to FacebookShare to Pinterest
Labels: Dishonest Reporter of the Year Award 2009