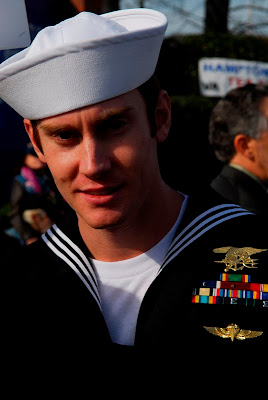 NORFOLK, Va. — The Navy SEAL charged with assaulting an alleged terrorist in Iraq in September declined to enter a plea during his Monday arraignment here, then took the unusual step of speaking to supporters and the media after the proceedings.

“Neither I or any of my teammates did what they are accusing us of,” Special Warfare Operator 2nd Class (SEAL) Matthew McCabe told the group gathered at Norfolk Naval Station’s Gate 5. “If I had agreed to non-judicial punishment, I don’t believe I would have gotten a fair trial. I believe that in a trial, when all the evidence is heard, I will be acquitted.”

Still, McCabe, through his lawyer, Neal Puckett, declined to enter a plea. His trial was set for Jan. 19 in Norfolk. Along with the assault charge, McCabe also faces charges of dereliction of duty and making a false official statement.

“It’s routine not to enter a plea until all motions are heard,” Puckett said after the hearing. Puckett did request that charges against McCabe be read aloud in court, officially naming the alleged victim as Ahmed Hashim Abed, who the U.S. thinks masterminded the 2004 ambush in Fallujah in which four Blackwater security contractors were hanged and burned.

The military accuses McCabe of striking Hashim in the midsection in Camp Schweidler, Iraq, not long after SEALs captured the man.

Also arraigned Monday was SO1 (SEAL) Julio Antonio Hertas Jr., who pleaded not guilty to charges of dereliction of duty, making a false official statement and impeding an investigation. His trial was set for Jan. 11.

A third SEAL, SO2 (SEAL) Jonathan Elliot Keefe, was not arraigned Monday; no date has been set for that proceeding. All three men belong to SEAL Team 10, based at Little Creek, Va....

From the latter link:

WAVY.com asked McCabe if he ever punched or abused the suspected terrorist. "No, I did not," he said. "Nor did the two other guys I was with."