D Day: "We will NEVER surrender" 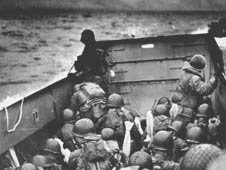 The Allied navies – Canadian, British, American – had brought a huge invasion fleet from England to France in total darkness. For men on the ships, first light showed the black shapes of other nearby vessels. For the Germans on shore, the dawn revealed a vast armada poised to invade occupied France.

The military planners had given Canada a major role on D-Day: to take one of the five designated beaches where Allied forces were to land to begin the liberation of Europe from Nazi Germany. The Americans had Utah and Omaha beaches in the west, then came the British at Gold, then the Canadians at Juno Beach and finally the British at Sword on the east.

The greatest seaborne invasion in history was aimed at 80 kilometres of mostly flat, sandy beach along the Normandy coast, west of the Seine River, east of the jutting Cotentin Peninsula. Canada's objective was right in the middle.

There were about 155,000 soldiers, 5,000 ships and landing craft, 50,000 vehicles and 11,000 planes set for the coming battle. For Canada, 14,000 soldiers were to land on the beaches; another 450 were to drop behind enemy lines by parachute or glider. The Royal Canadian Navy supplied ships and about 10,000 sailors. Lancaster bombers and Spitfire fighters from the Royal Canadian Air Force supported the invasion. (CBC here)

(CBC) Follow this link for lots of Canadian background

Shortly after midnight, three airborne divisions - the US 82nd and 101st and the British 6th, numbering over 23,000 men - take off to secure the flanks of the beaches. En route are myriad naval vessels and landing craft. On their way to France they rendezvous in the Channel at 'Piccadilly Circus'. Thoughout the night positions on the invasion beaches are bombed, although many miss their target. (BBC)

Churchill: 'This is your victory! It is the victory of the cause of freedom in every land ...'


'This is your victory! It is the victory of the cause of freedom in every land. In all our long history we have never seen a greater day than this. Everyone, man or woman, has done their best. Everyone has tried. Neither the long years, nor the dangers, nor the fierce attacks of the enemy, have in any way weakened the unbending resolve of the British nation. God bless you all.'

(For spine-chilling inspiration, go listen to the audios of Churchill on the BBC here)

US troops landing on the beaches of Normandy

The American GIs were a crucial component in the defeat of the Axis powers - and they had to be tough to survive. Find out what made them tick - and how they kept going through thick and thin.

They came late to the ballgame by British standards, but they came to play. They were crude, crass and lacking in military finesse according to Montgomery and other Allied leaders, but they won many more times than they lost.

They were a curious mixture of fervent volunteer kids and caustic older draftees. They were soldiers, sailors, airmen and marines from Iowa cornfields and Detroit assembly lines. They sweated through eight abbreviated weeks of basic training, and shipped out to help throw back the tidal wave of Axis aggression in Europe and the Pacific....

Life at war for the American GI was essentially long hours of hard physical labour, painful slogging under heavy weights and tedious boredom - interspersed with moments of sheer gut-wrenching terror.

It was a hard way to live, more like a hobo than a human being, and creature comforts of any kind were hard to find. They were always hungry and usually moving too fast for field kitchens and hot chow to catch up with the advance.

Stomachs shrank and often rebelled at the weeks of steady D and K rations, crammed with calories and carbohydrates, but tasting just a cut above cat food.

No matter what the weather, dehydration was always a concern. Marching made them sweat, and combat left them cotton-mouthed and croaking. Water was often what they could dip out of a shell-hole. Treated with iodine or halezone tablets to kill the bugs. It tasted...well, it tasted like nectar if you were parched and shaking after a firefight.

Of course, there was always French wine or Dutch beer to be liberated if a GI was storming through Europe. If he was island-hopping in the Pacific, a little Japanese sake was said to help kill the intestinal worms that infiltrated through cuts, jungle sores or shrapnel wounds....

(And yes, there is MUCH more on the US allies contribution here)


"You ask, what is our aim? I can answer in one word. It is victory. Victory at all costs. Victory in spite of all terrors. Victory, however long and hard the road may be, for without victory there is no survival."


D-Day. The 6th June 1944 and Churchill addressed the House of Commons with this speech:

"The House should, I think, take formal cognisance of the liberation of Rome by the Allied Armies under the Command of General Alexander, with General Clark of the United States Service and General Oliver Leese in command of the fifth and Eighth Armies respectively. This is a memorable and glorious event, which rewards the intense fighting of the last five months in Italy. The original landing, made on January 22nd at Anzio, has, in the end, borne good fruit....

It would be futile to attempt to estimate our final gains at the present time. It is our duty, however, to pay the warmest tribute of gratitude and admiration to General Alexander for the skill with which he has handled this Army of so many different States and nations, and for the tenacity and fortitude with which he has sustained the long periods when success was denied. In General Clark the United States Army has found a fighting leader of the highest order, and the qualities of all Allied troops have shone in noble and unjealous rivalry. The great strength of the Air Forces at our disposal, as well as the preponderance in armour, has undoubtedly contributed in a notable and distinctive manner to the successes which have been achieved....

But General Eisenhower's courage is equal to all the necessary decisions that have to be taken in these extremely difficult and uncontrollable matters. The airborne troops are well established, and the landings and the follow-ups are all proceeding with much less loss-very much less-than we expected. ... It is, therefore, a most serious time that we enter upon. Thank God, we enter upon it with our great Allies all in good heart and all in good friendship."


This is a GREAT speech, and you really should go read it all here. There are many great personal stories, and the BBC has a great archive. Go browse, and read them here. Some of my personal favourites, among many, are the Land Army stories here. No surprise to my regular readers, but the women in my family were very active, along with all the men.

"They shall not grow old, as we that are left grow old.
Age shall not weary them, nor the years condemn.
At the going down of the sun and in the morning
We will remember them." -


For Ken, my forever hero, who made me... and all the Brat family. Heroes every one. 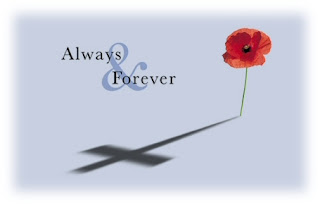 Email ThisBlogThis!Share to TwitterShare to FacebookShare to Pinterest
Labels: D Day: "We will never surrender"

10,000 Allied soldiers were killed or wounded on that one day. Thousands more will die over the next weeks trying to get out of Normandy (my uncle Abe was one of those killed just 4 days after D-Day).

There really are no words to convey the horrors that the Allied troops witnessed on those beaches and the rest of the war. Nor words to express the gratitude of the people of Europe, Canada, and the United States.

We will NEVER forget!

A worthy tribute once again, Brat. I couldn't make myself listen to the music, though. There is just simply not enough tissues in the house to mop up afterward.
My eternal gratitude goes out to the brave Allied troops who fought against incredible odds and experienced unbelievable horrors in the fight for victory over tyranny.

Thank you for such a wonderful tribute to all the men who chose to step off those ships so that "our" freedom would continue.

May we never forget the price that was paid for us then and now...