Saddam Hussein: "Ladies and gentlemen, we got him..." 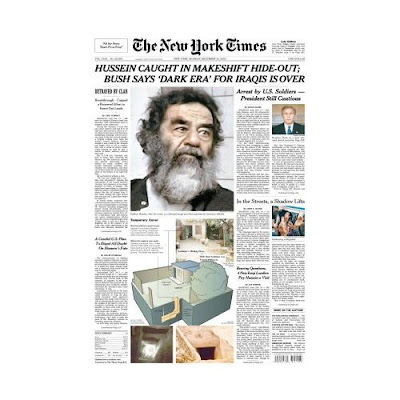 In 2003, on December 14, American forces found and captured Saddam Hussein:

"Ladies and gentlemen, we got him," US administrator Paul Bremer told journalists in Baghdad. "The tyrant is a prisoner."

Saddam Hussein was found hidden in a tiny bunker at a farmhouse about 10 miles (15 km) south of his home town, Tikrit.

A US military spokesman, Major-General Raymond Odierno, said the operation was launched soon after a tip-off from a member of Saddam Hussein's own extended family.

"Over the last 10 days we brought in about five to 10 members of these families, and finally got the ultimate information from one of these individuals," he said.(source) 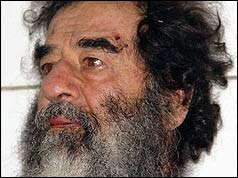 On December 13, 2003, the Islamic Republic News Agency (IRNA) of Iran first reported that Saddam Hussein had been arrested, citing Kurdish leader Jalal Talabani. These reports were soon confirmed by other members of the Iraq Interim Governing Council, by U.S. military sources, and by British Prime Minister Tony Blair. In a press conference in Baghdad, shortly afterwards, the U.S. civil administrator in Iraq, Paul Bremer, formally announced the capture of Saddam Hussein by saying, "Ladies and gentlemen, we got him." Bremer reported that Saddam had been captured at approximately 8:30 p.m. Iraqi time on December 13.

At the news conference Bremer presented video footage of Saddam in custody. Saddam Hussein was shown with a full beard and hair longer and curlier than his familiar appearance, which a barber later restored. His identity was later reportedly confirmed by DNA testing. He was described as being in good health and as "talkative and co-operative". At the news conference Iraqi journalists rose to their feet and started shouting, "Death to Saddam!" and "Down with Saddam!" (source)

Saddam Hussein was then given due process - unlike the process which had seen him murder thousands of others. If anybody still doubts that Hussein deserved the penalty he got, take a look at this - yes, horrific images:

From the International Herald Tribune:

BAGHDAD, Iraq: Two U.S. residents gave harrowing accounts of surviving shooting fields under Saddam Hussein at his resumed trial of genocide against the Kurds on Monday.


One described the day nearly two decades ago when he watched as his mother and sisters being shot to death.

"There was a trench. We were lined up. A soldier shot directly at us. I was hit on my shoulder," Taimor Abdallah Rokhzai, 30, told the trial of the deposed Iraqi leader and six former members of his regime, which resumed after a 19-day break... (here)

As these trials were ongoing, an American soldier shared what she saw. I was given permission to share what she wrote at that time, and did so over at Tanker Bros:

Below is the journal entry of SFC Mary M., for November 27, 2006. She is one of our troops serving in Iraq. She is one of OUR witnesses to history. She has graciously agreed to share it with you. As you read this first person account of Saddam Hussein, ask yourself: Are Iraqis really worse off now than they were under this man, as 'some' would have you believe? Thank YOU for your service Mary M. God bless all our troops!

It’s 0750 in the morning, I’m dressed in my civilian cloths and I’m waiting at the corner for COL B to pick me up to go to Saddam Hussein’s trial. I’ve been waiting on this for weeks now and finally my day to go! Even though we wore civilian cloths to the trial, we still had to wear that heavy IBA (Individual Body Armor) and helmet until we got to the court house.

Even though he has already gotten the death penalty from the first trial, another trial starts back up today with evidence of Saddam and six other defendants’ roles in the mass murders of the Kurdish people. Everybody rose when the judges (4 of them) walked in and then they started calling out the defendants. The very first one they called was Saddam Hussein, then Chemical Ali, then the other five defendants. After all of the defendants were seated, they called the first witness. This male witness, now 30 years old, told his story of him and his family and dozens of other families being taken from their villages, take to concentration camps, and finally to trenches/pits where they were thrown in, shoot to death, and the trenches covered with dirt. How he saw his mother and his three-year-old sister shot in the head. He was only able to save himself by playing dead and escaping once the Iraqi soldiers were gone. He was 12 years old when this happened, 1988. The second witness pretty much said the same thing but he went in detail about the way they were tortured in the camps before they were taken to the trenches to be killed. The stories went on for hours and they were so sad that my eyes just filled up with tears. Everything they said reminded me of what Hitler did to the Jews.

We were not allowed to bring cameras or recorders to the courtroom but we could bring a pad and pen. I wrote down every movement Saddam made including the two times he turned in his seat to pray. There was also one time when he raised his hand and tried to say something while one of the witnesses was speaking and the judge actually told him to “be quiet and stop to trying interrupt in his court room!” Saddam really looked like a beaten man but he was dressed in an expensive looking suit, wearing a beard, and glasses. I wrote down almost every word the witnesses said...

Despite all the grandstanding by Hussein, I later wrote this: 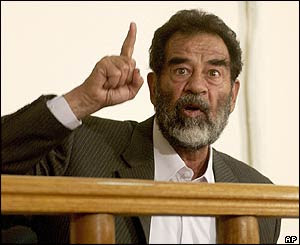 No links on this one - I am sure it will be on all the wires. 'Nuff said!

The former president was executed on 30 December 2006 after Iraq's highest court rejected an appeal. For more from the archives, start at the BBC here.