SAN ANTONIO, Feb. 6, 2012 – Navy veteran Hector Hernandez leans down to hug his dog as she pants noisily from her most recent dash around the living room. She nuzzles into his hand -- a momentary calm in the storm of activity that’s Bella. 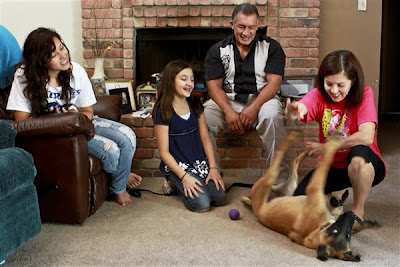 Hector Hernandez watches his wife, Anita, play with their foster dog, Bella, as their daughters, Tiffany, left, and Brianna look on in their home in San Antonio. Bella belongs to the Defense Department's Military Working Dog Breeding Program on Lackland Air Force Base in San Antonio. The program, which breeds Belgian Malinois for a variety of military assignments, relies on foster families to socialize the dogs and expose them to a variety of environments. DOD photo by Linda Hosek


“She’s a good girl,” Hernandez said affectionately as he throws the ball she’s already fetched several times from across the room. But this time, she bounds to his wife and two daughters, pausing to lick each member of her new family.

Although they already have a dog and weren’t looking for another, the Hernandez family took Bella in about three months ago -- not out of a sense of obligation because she needed a home, but due to a deep desire to serve.

Like Hernandez, who retired from the Navy, Bella is destined for a lifetime of service. She is one of several future military working dogs placed with foster families across town. These families, all volunteers, raise these dogs for about five months before returning them for an intensive training program at the Defense Department’s Military Working Dog Breeding Program at Lackland Air Force Base here.

This program, administered by the 341st Training Squadron, breeds, trains and raises Belgian Malinois to serve alongside other military working dogs, a select group used by DOD and other government agencies for patrol, drug and explosive detection, and in specialized missions both stateside and overseas, explained Bernadine Green, the program’s deputy director.

The program solely breeds Belgian Malinois, since that breed tends to make outstanding working dogs, able to carry out a mission equally well on an installation or in a combat zone, she said.
Puppies spend their first months of life in the breeding center, where experts begin assessing them for signs of future promise. The puppies that show potential are placed with foster families -- a mix of active duty, veterans and community members -- starting at about 8 weeks old.

“Families love to do it,” Green said. “It’s their way of giving back to the community and the military, and also for the sheer pleasure of caring for a puppy.”...

Read the rest of this great story here.