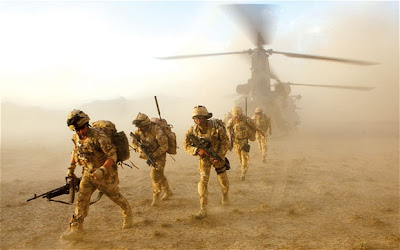 Flt Lt Anderson’s citation read: 'Anderson’s courage, and his calm, highly professional display of captaincy enabled the entire crew to conduct a textbook helicopter medical evacuation in the face of a bold, determined and coordinated enemy.' Photo: PA
Out of England, comes a story of amazing bravery. It includes Chinooks, Blackhawk MedEvacs, and Afghan children.

Flt Lt Mike Anderson was awarded the Distinguished Flying Cross after he landed his large Chinook helicopter during an intense gun battle in Helmand province.

Flt Lt Anderson’s Chinook was sent to the scene to rescue the children, who, it is suspected, were deliberately wounded by the Taliban to draw in helicopters.

In a substantial evacuation operation, he was accompanied by two American Blackhawk “medivac” helicopters and an Apache attack helicopter.

The American aircraft went in first to assess which of the children were most seriously wounded. But as the second Blackhawk landed, it was met with a barrage of mortar and machinegun fire.

Despite the maelstrom of incoming fire, Flt Lt Anderson, 31, flew into the landing zone, with his two crew members firing the helicopter’s machineguns to suppress the enemy....

What follows is a MUST READ here.