FORT HOOD, Texas, Feb. 27, 2012 - When Army Capt. Latoya James of the 120th Infantry Brigade received the Volunteer of the Quarter award during a Feb. 16 ceremony here, it was a family affair. 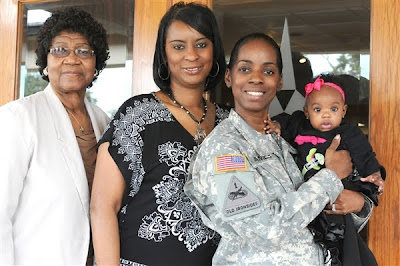 James' mother and grandmother were at the ceremony, and so was her 5-month-old daughter.

"My mother and grandmother are the most giving people I know. It means a lot to me that they are all here," James said. "I want to teach my daughter that when you give you are blessed, and you can bless others."

James said her grandmother, who still volunteers regularly, inspired her to give back.

"When I was 8 years old, my grandmother loaded up her car ... near Thanksgiving time with [dinners] of spaghetti, corn, bread and salad. Then she took me to the Salvation Army shelter in Fort Worth, Texas, where we served meals to people in a line that seemed to go forever," James said.

"From that point on, I was inspired," she added. "I saw the expressions on their faces and said to myself, 'When I get old enough, I will follow in my grandmother's footsteps and help others.'"..

Thank YOU for your Service, Captain.