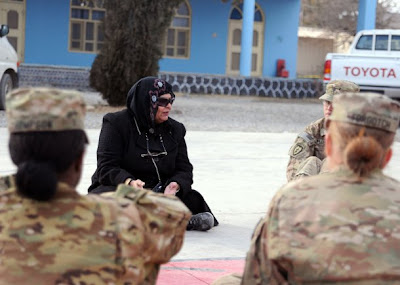 BiBi Mohammed, a linguist and interpreter from Pakistan, discusses with the Task Force Spartan Female Engagement Team the cultural differences regarding females from the United States, Pakistan and Afghanistan, Jan. 24, 2012, at Forward Operating Base Salerno, Afghanistan.


KHOWST PROVINCE, Afghanistan (Feb. 7, 2012) -- "To boldly go where no man has gone before" could be a mission statement for a group of paratroopers from the 4th Brigade Combat Team (Airborne), 25th Infantry Division, Task Force Spartan.

Twenty-five female Soldiers from the Alaska-based brigade are assigned to Female Engagement Teams, or FETs, whose mission is to interact with women and children in Khowst and Paktya provinces in Afghanistan.

The country's cultural norms restrict most direct communication between men and women, making the FETs an important part of building connections with the local population.

"We can interact with 50 percent of the population that the males cannot even look at, so we have that access," said 1st Lt. Jennifer Simmons, Task Force Spartan Female Engagement Team officer-in-charge. "We can also get that information a woman is willing to share with another woman. On [one team's] first mission, their battle space owner said in a situation report that the most significant information came from the FET."

Because the FETs often patrol with infantry units, physical fitness is a priority, according to Simmons.

"The terrain can be a factor," Simmons said. "They may or may not go up hills or just long distances in general. You never know what type of situation you're going to get in, so you need to be able to climb a wall with your full kit. [Since] we are attached to line units we do not want to place ourselves or our comrades in a position where we are the weaker link because of physical fitness."

Simmons said it's challenging having two-woman teams per platoon spread out between both provinces.

"It's harder to get everyone here for training and keeping an eye on everyone to make sure they're being used properly or if there are issues that need to be addressed," Simmons said.

"I went through a month of training at JRTC (Joint Readiness Training Center at Fort Polk, La.) and [Joint Base Elmendorf-Richardson, Alaska]" Morgan said. "That kind of prepared us. It gave us the basic idea of what we'd be doing."

Though she said the training taught her the basics of the culture, seeing day-to-day life in Afghanistan was an eye-opening experience for the Cincinnati native.

"The culture is so different than ours. [I've seen] big animals in the house like cows and chickens running around," Morgan said. "It's just different."

She said some of the Afghan women genuinely appreciate the opportunity to speak to the FET Soldiers.

"Sometimes we have to ask politely to leave," Rollins said. "They just don't want us to leave. A lot of times we will talk about their health and their family."

"I love my job," Rollins said. "When I first went through the training I wasn't sure how it was going to work with me, [because] I never worked with women like this before. I love the FET team. I believe it's a good idea for the Army to keep it going."

Email ThisBlogThis!Share to TwitterShare to FacebookShare to Pinterest
Labels: FET in Khowst Province