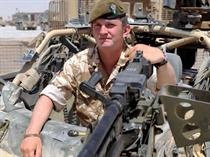 
A soldier from 2nd Battalion The Mercian Regiment (Worcesters and Foresters) has faced Taliban gunfire to help out colleagues in trouble not once but twice in recent months.

Sergeant Andrew McNulty first showed his fighting spirit when he rolled his broken-down vehicle down a hill to join his colleagues in a battle with the Taliban.

Then only a few weeks later he saved the lives of three colleagues after their vehicle plunged into a fast-flowing canal in the dead of night in Helmand province.

Sgt McNulty, known to all as 'Mac', is in the middle of a six-month deployment to Helmand province, Afghanistan. He is the Platoon Sergeant, the Second-in-Command, of Ava Platoon, a 30-strong team based at Camp Bastion providing protection for the huge resupply convoys, known as Combat Logistic Patrols (CLPs), conducted by 19 Light Brigade Combat Service Support Battalion.

On a recent resupply convoy, which included about 100 vehicles and snaked for more than 3km through the Helmand desert, Sgt McNulty was in a vehicle which had broken-down when the Taliban attacked the convoy as it went over a hill....

Because some stories need to be shared! Go read more about 'Mac' here.