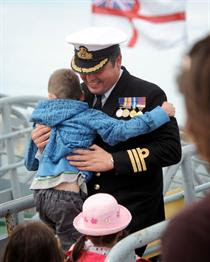 Royal Navy warship HMS Richmond has been welcomed back to the UK after returning from the Middle East where she spent six-and-a-half months supporting two security operations.

The Type 23 frigate and her 200 crew left Portsmouth in January and returned on 29 July 2009 after six months patrolling busy shipping lanes in the Gulf and Red Sea.

HMS Richmond spent the majority of time in the Gulf in support of Operation TELIC, providing force protection against insurgent attacks in the area. The operation includes the security of Iraqi maritime infrastructure by protecting the country's two oil-exporting platforms which are vital to its economy.

While en route to the region, HMS Richmond carried out anti-piracy patrols in the Red Sea in support of Operation CALASH.

Her Commanding Officer, Commander Mark Southorn, said he was proud of the performance of his personnel under challenging conditions:

"I'm extremely proud of the sailors on HMS Richmond who have worked so hard over the past seven months. Their contribution has been exceptional and I wish them a really good and well-earned leave with their family and friends."...(read more here)

You all know that these are my most favourite stories. Oh, and I found a very cool site: Jack Speak - Blog of the Royal Navy. Don't know what Jack Speak is? Check it out here. All part of the B*N*S*N service.