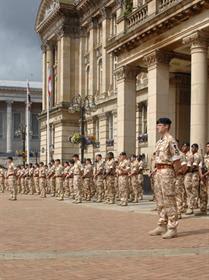 Hundreds of people lined the streets of Birmingham's city centre yesterday to show their support for troops from 26 Regiment Royal Artillery who have recently returned from Afghanistan and Iraq.

Crowds packed around the Council House in Birmingham yesterday, Wednesday 22 July 2009, to see over 200 soldiers from the unit, known as the West Midland Gunners, on parade.

Having been granted the Freedom of the City, the gunners were led by the Band of the Parachute Regiment, with drums playing, colours flying and bayonets fixed, on what was their fist ever march around Birmingham.

The Freedom Roll was carried ahead of the troops in a silver casket on a circular route through Birmingham.

"Birmingham will be giving the warmest of welcomes to the 26th Regiment Royal Artillery. It has given courageous service in both Afghanistan and Iraq and I am very proud to be granting them the Freedom of the City."...